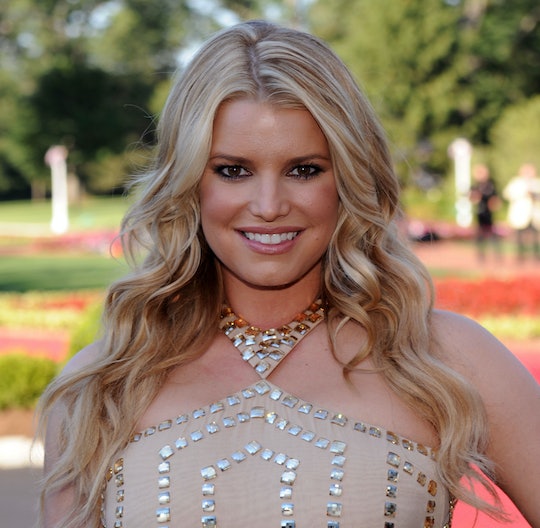 For the past few years, Jessica Simpson has been delighting her followers with her hilarious antics on social media. Whether she's getting super honest about pregnancy in a way I think few of us might be able to deal with or just sharing sweet photos of her three kids, her Instagram feed has been nothing if not entertaining. And while I suspect it will continue to be entertaining, it looks as though the designer is not terribly interested in feedback these days. If you're wondering why Jessica Simpson turned off Instagram comments as of Tuesday, it might have something to do with a recent bout of mom-shaming that recently flooded some of her photos.

Simpson and her NFL player husband Eric Johnson are parents to three kids, 7-year-old daughter Maxwell Drew, 5-year-old son Ace Knute, and baby girl Birdie Mae. Ever since the singer became a mother, she appears to have been one of the preferred targets for mom-shamers circling the murky waters of the internet looking for someone to attack. I'm not sure why mom-shamers seem to want to take almost constant aim at Simpson, but the fact is it appears she can barely share a photo of one of her children without her Instagram feed being inundated with negative comments. But, as it appears, this will not be a problem any longer.

As of Tuesday, Aug. 13, the Dukes of Hazard star has disabled her Instagram comments, although don't panic too badly because she's still sharing cute pictures of her family — thank goodness. Like this sweet shot of herself, Birdie, and Johnson shared on Aug. 1.

Simpson hasn't said exactly why she decided to disable comments on Instagram but I have a sneaking suspicion it can all be boiled down to a recent mom-shaming incident that might have been the last straw for her.

After months of being criticized for the way she let her baby sleep in a photo (which she later explained was a pose, according to Women's Health, as though she owed anyone an explanation), or really anything she seemed to do as a parent, one incident might have tipped her over the edge. A few weeks ago, Simpson took her 7-year-old daughter Max to get her hair dyed in a look that was "inspired" by the Disney film The Descendants. And every pearl-clutching commenter out there lost their minds.

Critics took to Simpson's Instagram to accuse her of setting a poor example, of ruining young Max' hair. As one such critic wrote, according to Glamour, "So sad to see a child this young getting her hair dyed. She looked so much prettier with her natural golden locks. She still should be a child in every sense. That time is short."

Simpson had some incredibly supportive celebrity back-up from singer Pink, who dyed her own daughter Willow's hair blue with the hashtag #bluehairdontcare and the caption, "I heard people were bummed on Jessica Simpson for letting her seven year old get her hair colored. So we thought we’d share what we did yesterday."

As much as I'm sure Jessica Simpson appreciated this support, it looks as though the damage was already done. After years of welcoming millions of fans to share a dialogue on her social media, Simpson has disabled her comments. This might not seem like a terribly big deal, but I think this could represent something pretty awful. A group of strangers who took something sweet and kind and lovely and ruined it simply because they could.

And what's worse? They potentially made a mom feel bad. Celebrity or not, moms feel bad a lot of the time anyhow. They certainly don't need comments from complete strangers making it worse.

More Like This
Kirstie Alley’s Kids Remember The Actress As An “Amazing Mother & Grandmother”
Julia Roberts Shared A Rare Photo Of Her Twins Hazel & Finn On Their 18th Birthday
Hilary Duff Cut Her Daughter Mae’s Hair & Gave Her The Most Adorable Bangs
The “Tripledemic” Is Scary, But I Feel Less Helpless When I Wear A Mask