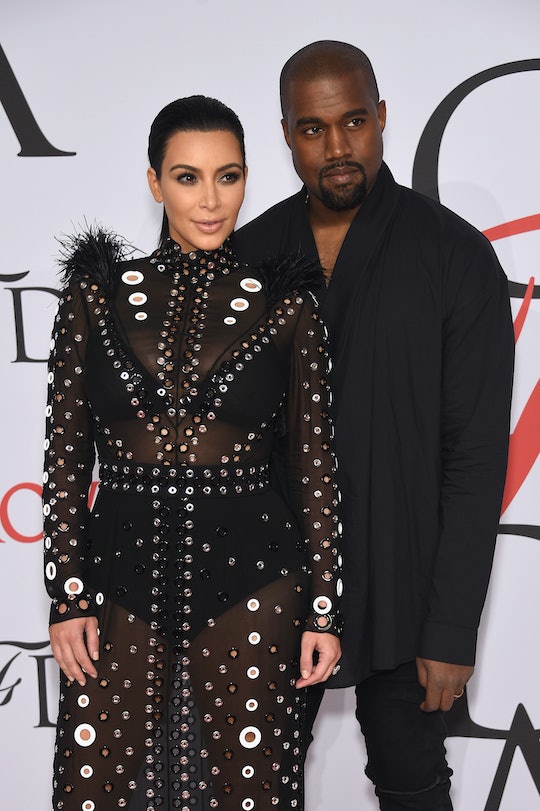 Why Did Kim & Kanye Name Their Baby Saint? It's Not "Robert," But It Works

Early Saturday morning on December 5, the Wests shared some v. important news with the world. Kim and Kanye announced the arrival of their son, Saint West, and now we're all wondering why Kim and Ye chose to name their son Saint? Kim posted the baby's name on her site just days after his arrival, noting that Saint West was 8 pounds, 1 ounce upon arrival. Well, gather round my children and you shall hear of the naming conventions of the Kardashian West brood. Speculation on what the Wests would name their son is as old as he is (like, literally as old as he is). In an appearance on Ellen, Kim went to painstakingly funny lengths to remind us all that no, they're not going to name their kid South, which, TBH is a bummer.

We haven't [named the boy yet]. I start thinking at about eight months, so we're about one month away.

Like I said, bummer. Though to Kim's credit, after a name like North (which they chose in part because it's the highest point), you can't really give a kid a name like "South" and feel OK about your parenting choices (or your creativity). What would you tell them? "Uh, it's the lowest point?" Yeah, didn't think so. Prior her to her delivery, Kim hinted at baby boy's name by sharing a list of push presents she'd love to receive from her partner, Kanye, post birth. (If you can find nothing else to love about Kim Kardashian, let it be this: She knows how to dream big.) Though, to be honest, Kim and Kanye choosing the name "Saint" was really not on anyone's radar.

When Kim announced that they'd named their baby Saint, everyone was taken aback. What does Baby Boy West's name mean? Why'd they choose it? Shortly after delivering, the rumor mill began to swirl, suggesting that Kim and Ye had chosen baby's middle name as "Robert," in honor of Kim's late father, Robert Kardashian. Those rumors appear to be false, however, because just like big sister North, Saint doesn't have a middle name.

So, why Saint? Well, here's a few guesses.

A Saint Is Well, A Saint

The word "Saint," as defined by the Internet, is "a person acknowledged as holy or virtuous and typically regarded as being in heaven after death." Given how difficult it was for Kim to get pregnant with her second child, I think a name like Saint is fitting. It's the culmination of an incredibly difficult pregnancy journey on top of an incredibly difficult pregnancy. Also, let's face it: Kim and Kanye are not the type to pick a "normal" baby name, or even a name that you'll hear in everyday conversation. A name like "Saint" embodies everything there is to love (and if you're the type to loathe, loathe) about the Kardashian-West brand: You love it, you hate it, you think it's fitting, you realize it's fitting.

Did They Honor The Fashion Brand?

It's been noted time and time again that Kim and Yeezus are big into the fashion game. If you guys don't mind my sharing, one of my most recent favorite moments in our nations storied Kardashian history is when Kim tells Kourtney and Kris that she needs to go to Paris to get pregnancy clothes. So much of me wanted to point her in the direction of Destination Maternity which is probably like, literally, up the street from her, but then the more rational side of me loved that Kim was literally about to fly to Paris for some form-fitting clothes.

You could argue that Yves Saint Laurent is one of the most respected fashion houses in the fashion industry, and it makes sense that Kanye would want to honor his son in a way that was reciprocal for him, too. Kanye has been outspoken about his fashion influences, and a name that carries as much power and influence as Yves Saint Laurent would be an obvious choice for their second child together.

There Was No "Topping" North

OK, I think we've all established that there is no way you're going to out-north a name like North. You just can't. It's the highest point. (And who could forget the shade Kim threw at Kourntney on a recent episode of KUWTK when she was talking about showing off the North Star to North? (Not me, that's for sure.)

The only name that could top Saint? Bless. (I'll be back in 2017 to collect my congratulations, y'all.)

Robert Was Never Going To Happen

Shortly after Kim delivered — and frankly, right after Kim announced she was having a boy — opinions flew in from every direction hoping that Kim might choose to honor her late father by giving her son the name "Robert." In order to figure out why they didn't name their baby after Kim's dad, let's revisit North's birth, shall we?

All throughout Kim's first pregnancy, opinions poured in like heavy rains lightly suggesting that Kim and her husband should name their daughter Donda, as a way of remembering Kanye's late mom, who passed suddenly in 2007. First, the suggestion implies that the only way to commemorate his late mom is to give the name to his daughter, and second, it suggests that a name like "Donda" is the only name worthy of giving to a child once you've lost a parent.

Some people choose not to pass on family names to their children (as is their right), and to be totally honest, that's a completely personal choice for Kanye and Kim to make. Kanye was incredibly close with his mom and Kim especially close with her father. Their losses were deeply personal and tragic, but it doesn't make them any less valid if they choose not to pass those names on to their children.