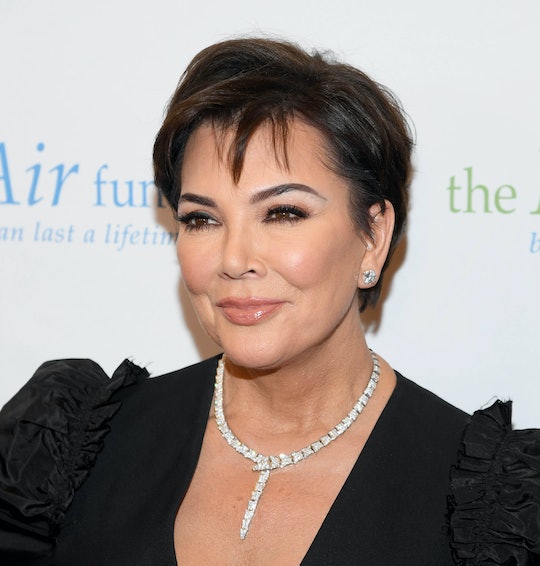 Kim Kardashian and her husband Kanye West just welcomed their fourth child, a son, and of course everyone is all out of sorts about his unique name. The couple does have a history of unusual names that make people unusually opinionated, and their latest was no exception. Especially since they didn't appear to be in any great hurry to give the name context. But here's some good news for Keeping Up With The Kardashians fans: If you're wondering why Kim Kardashian named her son Psalm, her mom Kris Jenner just kindly settled all the speculation for us.

For those who are a bit behind on their Kardashian news, here's how it goes: Kim Kardashian and Kanye West welcomed baby Psalm on May 9 via surrogate, according to Us Weekly. The baby boy is the couple's fourth child, joining their 5-year-old daughter North, 3-year-old son Saint, and 1-year-old daughter Chicago.

Prior to Psalm's birth, Kardashian admitted that she and her husband were having a bit of a tough time agreeing on baby names. And during an appearance on Jimmy Kimmel Live!, the KKW mogul said that she was thinking of naming her son after her father and brother, Robert Kardashian, as well as looking into Armenian boys' names, according to the BBC.

About one week after her baby's birth, however, she shared a sweet photo of her baby boy with the name she and West finally settled on: Psalm West.

As lovely as it was to get a name, neither she nor West were giving any hints to the name's significance. But fortunately momager extraordinaire and grandmother to a whole heap of KarJenner babies Kris Jenner was kind enough to put us all out of our misery.

During an event in New York for the Fresh Air Fund's Annual Spring Benefit, Jenner talked to Entertainment Tonight about her newest grandson and the significance behind his name. "The inspiration was the Book of Psalms in the Bible. I think it’s just a wonderful way to celebrate how they feel. And he’s such a blessing, so it's perfect," she told Entertainment Tonight on Wednesday.

The word "Psalm" also means song in Hebrew, which feels like a pretty fitting name for the son of musical icon Kanye West, especially since his Sunday Services have become such a cultural cornerstone in recent months. In fact, a source close to the couple told People that both West and Kardashian settled on the name Psalm as a way of honoring their own spirituality.

"I know that both of them read the Bible regularly now. Kanye loves the Books of Poetry of the Bible: Job, Psalms, Proverbs, Ecclesiastes, Song of Solomon. He reads them over and over," the insider reportedly told People. "Psalms is the longest book in the Bible, but Kanye believes that there’s a lot of wisdom in them."

Whatever her newest grandchild's name might be, Kris Jenner is pretty much just happy to have him around. As she told Entertainment Tonight, "I don't know, he's just adorable!" Which tells me that baby Psalm might have an unique name, famous parents, and celebrity status in his own right... but at the end of the day he is simply loved by his family. And that is always enough.