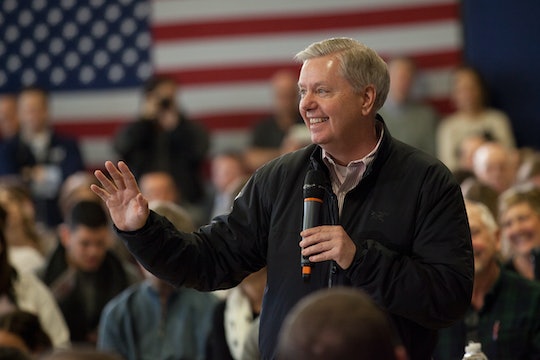 Why Did Lindsey Graham Support Ted Cruz? The Two Have A Mutual Enemy

Do people still use that word, frenemy? I hope so. It's so great. A frenemy is basically someone you don't really like or trust or respect but hey, they're going to the same party as you, so. Well, there's a new set of frenemies in town, folks, and Texas senator-turned-GOP presidential hopeful Ted Cruz and South Carolina Sen. Lindsey Graham are set to take on the respective roles. On Thursday, the two senators announced a strange pairing, with former candidate Graham giving the Texan his endorsement and stating that he would be throwing a fundraiser for him as well. So why did Lindsey Graham finally decide to support Cruz?

Apparently, as he sees it, Cruz is the "best alternative to Trump." In a move that hearkens back to that "huh?" moment when New Jersey Gov. Chris Christie decided to support Donald Trump (after exchanging some pretty heated words with the man himself), Graham reportedly decided to cast his lot in with Cruz, a man he has openly bashed for months, in an all-out effort to bring the Trump train to a screeching halt.

What brought about this change of heart, you may ask? In an interview with CNN's Dana Bash, Graham explained that, while he isn't really a huge Cruz fan, he's pretty much the only alternative against Donald Trump. Or at least, the only strategic option that makes sense to Graham.

"He's certainly not my preference, but he's a reliable Republican, conservative, which I've had many differences with," the South Carolina Republican said. "John Kasich is the most viable general election candidate. I just don't see how John gets through the primary. This is an outsider year, and he is an insider."

One can only imagine how humbled and honored Cruz must have felt to be the subject of Graham's effusive praise. Although in all fairness, this lackluster endorsement is a massive improvement over some other thoughts Graham has shared regarding Cruz.

"If you killed Ted Cruz on the floor of the Senate, and the trial was in the Senate, nobody would convict you." Graham said at the Washington Press Club Foundation's 72nd Congressional Dinner, according to CNN.

Graham has also compared a nomination for Cruz or Trump to the choice between being shot or poisoned, and has frequently questioned Cruz' viability as the next President of the United States.

But hey, you know what they say, politics makes for strange bedfellows. Graham, who ended his own presidential campaign back in December, will be hosting the aforementioned fundraising dinner for Cruz on Monday.

As to whether or not Graham's endorsement will aid Cruz in his lagging presidential race... let's just ask former Florida Gov. Jeb Bush and Florida Sen. Marco Rubio. Both GOP Presidential hopefuls. Both recipients of Graham's illustrious endorsement. And now both have suspended their campaigns. If nothing else, it looks like this endorsement should at least provide plenty of comedic fodder for some time. Right?