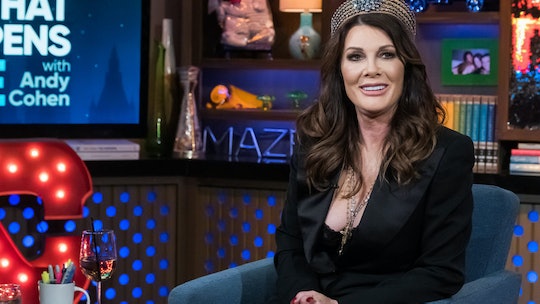 I'm So Nervous About Why Lisa Vanderpump Skipped The 'RHOBH' Reunion

Someone please resuscitate me, because I am in complete and utter shock. Lisa Vanderpump ditched The Real Housewives of Beverly Hills reunion. Although bad blood has been brewing throughout the ninth season of the show and she previously hinted that she would not attend the Season 9 reunion nor return for Season 10, I honestly didn't think that it would actually happen. Lisa has been part of the main cast since the first season back in 2010. So of course, fans are disappointed with the news. But why did Lisa Vanderpump skip the RHOBH reunion? The tea just keeps on coming.

Prior to the RHOBH Season 9 reunion taping on Jun. 5, a source told Page Six that Lisa would be the only cast member not in attendance.

“The only reunion that she has planned today is a long-awaited one-on-one with the mayor of the city of Los Angeles at his residence to kick off Pride Week in the city,” the source said.

The insider also implied that there was still animosity between Lisa and her RHOBH co-stars.

“While the other girls are bashing her, she has a host of topics that she is eager to speak to the mayor about,” the source told Page Six. “She has a lot more important issues to address, none of which are the Housewives.”

Later, Andy Cohen confirmed that Lisa didn't go to the reunion during an Instagram Live chat with his friend, Anderson Cooper.

“The reunion is going great,” Cohen said, per Us Weekly. “It’s major. Lisa Vanderpump’s not here.”

Since the news of Lisa's absence broke, fans have been speculating why the Vanderpump Rules star decided not to show up. Throughout Season 9, Lisa hasn't exactly been on good terms with her RHOBH co-stars. However, fans seem to believe that the feud boils down to one event — Puppygate.

Per People, RHOBH's Puppygate started when Dorit Kemsley adopted Lucy Lucy Apple Juice from Vanderpump Dogs. When Dorit realized that Lucy wasn't an appropriate fit for her home, she gave the dog away to a "beautiful home." But Lucy's new dog owner didn't want the dog and eventually gave Lucy to a shelter.

As the incident was shown on RHOBH, Lisa has been accused of producing the drama for cameras, which resulted in tension among her co-stars.

Speaking to DailyMailTV, Lisa revealed that she didn't want to attend the reunion to avoid any further harassment.

"The objective of the reunion is to reunite, right? And I have no inclination to reunite with the women who've been harassing me for 10 months now," Lisa said.

The publication then asked if Lisa would return for Season 10.

Is it really The Real Housewives of Beverly Hills without Lisa Vanderpump? TBH, I'm not so sure. Although Lisa's status on Season 10 has still yet to be confirmed by Bravo, her response to leaving the show in addition to her absence in the Season 9 reunion doesn't exactly inspire confidence.

The Real Housewives of Beverly Hills airs Tuesdays on Bravo.