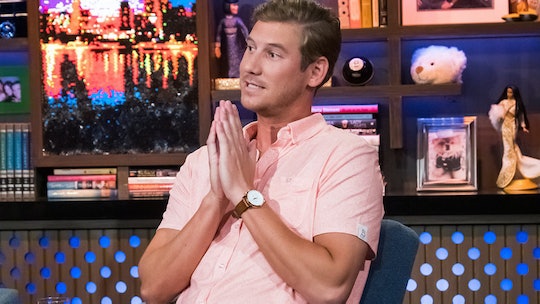 The cast of Southern Charm is well-acquainted with drama, but Madison LeCroy and Austen Kroll's complicated on-again, off-again relationship is exhausting. For now, it seems the two have decided to go their separate ways — sort of. At the reunion special for Season 6, Austen and Madison told Andy Cohen they are no longer together, but it looks like they are still in a friends with benefits relationship. So why did Madison and Austen break up in the first place? Hold onto your hats, because this is one tangled web, and Southern Charm fans might need to take a moment to catch up.

Throughout Southern Charm Season 6, Austen and Madison weathered through numerous cheating scandals from both sides. Austen was accused of sleeping with two women after a now-infamous video was released. Meanwhile, during an episode of Watch What Happens Live with Andy Cohen, Madison admitted to cheating on Austen in retaliation. "I said, ‘Well it looks to me like a hall pass,'" she stated. "I can do whatever."

Despite their ups and downs, the couple remained in each other's lives, and they seemed to be happy together in the Season 6 finale. Since then, Austen and Madison have split, and although it's difficult to pinpoint exactly why, it's possible the reason why was hinted during the cast's trip to Colorado.

In the twelfth episode, titled "Who Put the Mad in Madison?," Austen and Madison discussed their relationship status. The pair admitted they didn't want to date other people, and Madison opened up about the root of the problem.

"I'm not going to be sitting at home making dinner with you showing up at 11 o'clock. It's about compromise, and you're not willing to do that," she said. "That's why we're not together."

Nevertheless, Madison still has plenty of love for Austen, according to an interview with Us Weekly. "Austen and I’s relationship is complicated, obviously. He has said that multiple times. I think right now he’s focusing on his beer, which is so great," Madison shared. "I’m not trying to be in any way … I guess I would say just a distraction. I don’t want to say that we wouldn’t revisit this, because we do feel a type of way about each other."

Madison also revealed where her relationship with Austen stands now, per People. "It’s just hard not getting it right," she said. "We care about each other a lot. He’s been my best friend for a year and half, even though we’ve done a lot of messed up things to each other. We try to find ourselves back where we always end up. We just take it day by day."

Regardless, the hairdresser explained she still has hope for reconciliation. So it's possible Madison and Austen could get back together in the future. That is, if Madison has anything to say about it.

"He’s something I cannot stop," she told People. "We just have a good time together, and it’s hard to convince everyone that this is your relationship when they are looking from the outside."