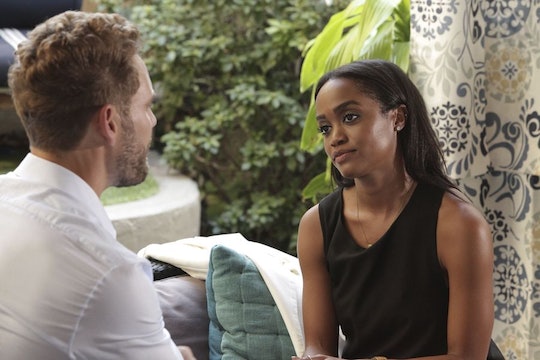 Nick Made A Difficult Choice On 'The Bachelor'

We all knew it was going to happen. Ever since the announcement came that Rachel would be the next Bachelorette, it became clear that her days attempting to win Nick's heart on The Bachelor were numbered. Honestly, if that announcement hadn't happened so early on, I would have figured Rachel would end up in final two this season. But when Nick sent her home Monday night, it was still a shock because she's Rachel. So why did Nick eliminate Rachel on The Bachelor?

Even though everyone knew she likely wouldn't make it to the end, Nick sending Rachel home on The Bachelor was still hard to handle because out of all of the women, she's been an easy favorite. And yes, that was well before we all knew she wouldn't be getting engaged to Nick at the end of the season. But Nick had to send someone home and between Rachel, Raven, and Vanessa, he chose to send Rachel packing.

Nick's history with Rachel up until that point was pretty solid. He had a successful hometown visit with her, multiple one-on-one dates together, and the two seemed to legitimately hit it off from the first night. Like I said, if viewers didn't already know that she wasn't long for Season 21 of The Bachelor, a lot of fans would have expected her to win.

Rachel and Nick had a heart-to-heart on their date and both admitted to being scared of their very real feelings for each other, cheesy and adorable grins in place. But while they talked about what they hoped to find in their partner, they seemed to be, as per usual, totally in sync with each other. As the day ended, Rachel said that she could tell she was falling for Nick and Nick even said he was falling for her too. But, obviously, it wasn't enough.

Nick said he followed his heart, so you can't fault him for that. But at least he sat down with Rachel to properly say good-bye. Nick sent home Rachel on The Bachelor because his feelings for her weren't strong enough. And even though he assured her that the feelings he does have for her will never change, it was obviously still a slap in the face for the soon-to-be Bachelorette.

Even though Rachel will be the next Bachelorette and fans knew she wouldn't be ending up with Nick on The Bachelor, watching Nick eliminate her was heartbreaking. Nick clearly had some real feelings for her, but he had to let someone go and his feelings for Vanessa and Raven were obviously a lot stronger.