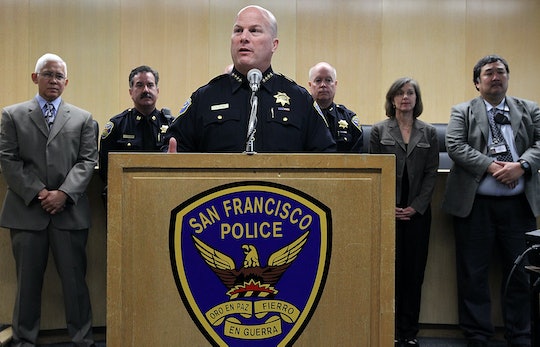 Why Did San Francisco Police Chief Greg Suhr Resign? He Has Been Mired In Controversy

San Francisco has long been a symbol for liberalism, for tolerance. In the '60s, free-loving hippies flocked to the Golden Gates to enjoy a little peace, love, and understanding. Sadly, some aren't painting San Francisco with the same gentle brush these days. The city's police department in particular has seen a real sea change in public opinion, and at the center of the storm is their police chief. Under serious pressure from protesters and the mayor's office on Thursday, the police chief stepped down. So why did San Francisco Police Chief Greg Suhr resign?

The final nail in the coffin for Suhr was the fatal shooting of a woman by police in the Bayview District early on Thursday, prompting an activist group called the Frisco 5 to stage a protest. But the writing has been on the wall for much longer than that.

Detractors have been calling for Suhr's resignation for months, with protesters forcing their way into City Hall and staging a 17 day hunger strike to get rid of the police chief. The SFPD has been struggling to maintain its dignity in the wake of a racially charged texting scandal last year, allegedly involving four of its officers, as well as three fatal police-related shootings since December. While Suhr was the one to release the nine pages of racist texts, announcing, "We have nothing to hide, there are the actions of just a few," not everyone agreed.

"These texts evidence a deep culture of racial hatred and animosity against blacks, Latinos, gays, and even South Asians," public defender Jeff Adachi said during a news conference on Tuesday. "It can no longer be said to be an isolated problem."

But will Suhr's resignation really make a difference? Not according to Mayor Edwin Lee, who told the Wall Street Journal, “I just don’t believe that having a different chief automatically gains the kind of groundwork that we are already gaining with the reforms that we have.” San Francisco's NAACP President Reverend Amos Brown agrees with the mayor. “One man did not create this racial bigotry that’s in this department."

Certainly, Suhr seemed to be making very real efforts to effect change in the SFPD. After officers shot 26-year-old black man Mario Woods in December (six of the wounds were allegedly in his back), Suhr requested a review by the Justice Department’s Office of Community Oriented Policing Services. He also fired several officers who were involved in the aforementioned 14-person texting scandal last year, when the N-word was repeatedly used and black people were compared to "a pack of wild dogs."

While Lee once stood by Suhr, Thursday's alleged shooting (which was caught on video by bystanders) saw him changing his tune. The mayor told reporters in a press conference at City Hall,

I have previously expressed confidence in Chief Suhr because I know he agrees with and understands the need for reform. But following this morning's officer-involved shooting and my meeting with Chief Suhr this afternoon, today I have arrived at a different conclusion to the question of how best to move forward.

It's all been a whirlwind in San Francisco of late. One can only hope that Suhr's resignation will start to contain what has clearly become a serious issue in the city of love and peace.