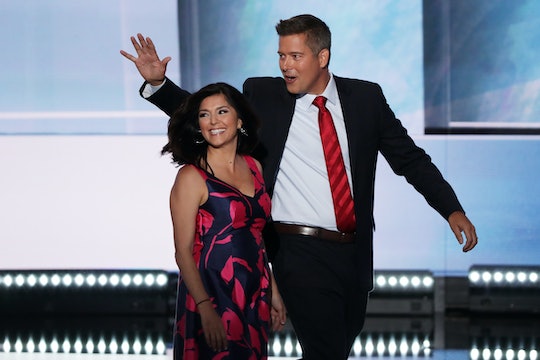 Wisconsin Rep. Sean Duffy, a Republican, recently announced his resignation from politics effective Sep. 23, just as the presidential election for 2020 begins to heat up. Although some politicians leave Washington, D.C. due to a possible scandal or other unsavory reasons, this wasn't the case here. As it turns out, Sean Duffy resigned for a terribly sad reason involving his unborn child.

More Like This
30 Vintage Photos Of Parents Giving Their Babies A Bottle
Here's The Deal With Babies Who Sleep With Their Eyes Half Open
33 Instagram Captions For The First Night Home With Your New Baby
What Are "Blurple" Baby Feet? Experts Explain

The politician and former MTV Real World reality star took to Facebook on Monday to share the news that he would be retiring from politics next month in an effort to spend more time with his family, including his wife who is expecting the couple's ninth child. As Duffy explained in his emotional post, the ninth child he is expecting with wife Rachel Campos-Duffy, also a Real World alum, is a baby girl who has "a couple of holes in her heart" which could require serious care in the months after her late October due date. "Recently, we’ve learned that our baby, due in late October, will need even more love, time, and attention due to complications, including a heart condition."

Duffy didn't name his unborn daughter's condition, but it's possible she might have a ventricular septal defect, a diagnosis in which holes in the heart's structure change the normal flow of blood, according to the National Heart, Blood, and Lung Institute. If this condition is not corrected, it can cause heart problems down the road, according to the University of Southern California (USC).

On Tuesday Duffy appeared on Fox & Friends to explain in further detail why he needs to be fully present for his family in the months after their baby girl's birth, stating:

I love politics, but I love my family, and I think it’s always a balance. The schedules are grueling. I’m out in D.C. four days a week, and then I’m back with Rachel. But when I’m back here with Rachel and the kids, I have a big district, and you gotta travel around and see people and we get beat up a little bit as members of Congress. We’re a favorite punching bag.

While it is presumably difficult for the Republican congressman to leave his position in Washington D.C., he also noted in his statement how he's looking forward to spending more time with his family in the future.

"I will miss being your Congressman, but I am also looking forward to having more time with my family, being home for more birthdays and hockey games, and having time to enjoy and care for our new baby girl, who is already so loved by our family," he explained.

As Duffy ends his tenure as a congressman in Wisconsin's 7th District, a position he has held since 2011, other contenders will hopefully begin to step up to fill his role because it's clear he will be plenty busy with his family for the foreseeable future.