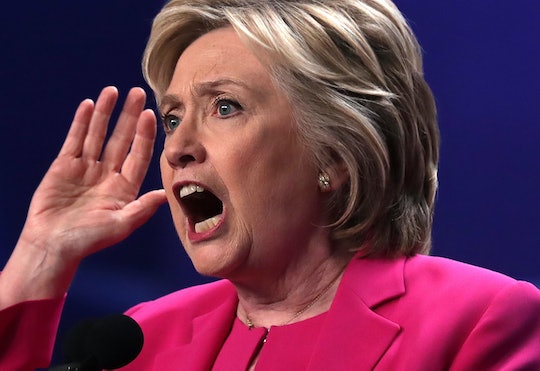 Why Did The State Department Reopen The Case Against Hillary Clinton? It's Not Over Yet

Hillary Clinton won't face criminal charges as a result of the email controversy that has plagued her presidential campaign and played a role in causing her trustworthiness numbers among voters to plummet. But just days after the FBI found no evidence of wrongdoing when the presumptive Democratic nominee used a private server to send and receive sensitive emails during her tenure as Secretary of State, the State Department reopened the case against Hillary Clinton, it announced Thursday, July 7. This time, officials will assess whether she and her top aides mishandled classified information. If they did, they could lose the security clearances they'd need to serve on her national security team if she makes it to the White House.

The State Department is actually resuming a review that it started in January, the Associated Press reported, but that was suspended in April in order not to interfere while the FBI made its own inquiry. Now that the FBI has wrapped up — with its director, James Comey, calling her actions "extremely careless" — the Justice Department will investigate prominent Clinton staffers, likely including Cheryl Mills, Jake Sullivan, and Huma Abedin. They wrote many of the emails in question, 22 of which were classified as "top secret," albeit some retroactively.

Despite the email snafu and the image problem it definitely presents, Clinton still has the support of many high-level figure within her party. Just hours after the FBI announced its recommendation of no charges on Tuesday, President Obama joined Clinton for their first joint campaign appearance, extolling her "steady judgment," and not addressing the email issue. And Clinton's opponent for the Democratic nomination, Vermont Sen. Bernie Sanders (who, yes, is still technically in the race), is expected to endorse her next week.

But what does it mean for her standing among the American electorate? In June, CBS reported that 60 percent of voters don't trust her, although the same was true for Republican candidate Donald Trump. The fact that she won't be held legally accountable for the clear violation she committed when she used her personal email server angered many who believe her political clout has unjustly elevated her above the law. With the Justice Department refusing to let it go as it executes another probe, the result could be a Hillary Clinton public relations catastrophe — even though her poll numbers indicate she'll crush Trump in November.

The State Department has not set a deadline for the review, but spokesman John Kirby said in a statement that the department will aim to complete its work as quickly as possible:

Given the Department of Justice has now made its announcement, the State Department intends to conduct its internal review. I cannot provide specific information about the department's review, including what information we are evaluating. We will aim to be as expeditious as possible, but we will not put artificial deadlines on the process. Our goal will be to be as transparent as possible about our results, while complying with our various legal obligations. I'm not able to make commitments today one way or the other about what we will be able to disclose.

Clinton may be glad the State Department will carry out it investigation in a speedy fashion. After all, the faster they complete their task, the faster it will be out of the headlines. And Clinton's had enough bad press over this, like the revelation this week that hostile hackers likely gained access to the account, even though they would have been too skilled to leave a trace. Also, she'll need to know which, if any, of her people are going to lose their security clearances, because there's no doubt the possible next president is already working on building her team.