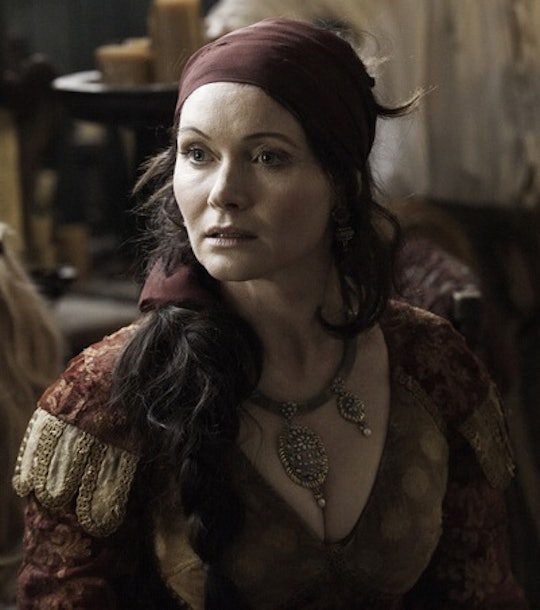 Why Did The Waif Kill The Actress On ‘Game Of Thrones’? She Was Helping Arya

Throughout Season 6 of Game of Thrones so far, all Arya has wanted was to pass all of Jaqen H'ghar's tests and become No One. But once she realized that, nah, a girl doesn't want to become No One, she was ready to dip out of Braavos and (finally) head home. But Waif decided to not only try and kill her, but then go and kill the woman who was helping Arya recover. So, why did The Waif kill Lady Crane on Game of Thrones? Obviously, the actress was the only one who was helping Arya and had really been the only "friend" she'd made in Braavos, so that alone was a total bummer. But beyond that — Waif knew killing Lady Crane would hit Arya right where it hurt most. And to be honest, that's most likely part of the reason why she killed her.

Since we're going down that route already, killing Lady Crane could even be part of the reason why Arya denounced her loyalty to the Faceless Man. OK, so maybe having one of them try to kill her played a huge role in her decision to be leave the Faceless Men behind, but the Waif killing Lady Crane was just the extra push — you know, in case Arya had harbored any doubts. The Waif seemed to be jealous of Arya from the beginning, immediately weary of her when she came to the House of Black and White. You can't totally blame her since Arya was pretty much Jaqen's prized pupil, garnering his attention way more than the Waif. But the whole issue with the Waif was the fact that, even without Arya, she likely would've never become No One, either. Her desire for revenge and the death of Arya was too great to not be a part of her personality, rather than the persona of "No One." So even if Arya didn't kill the Waif on Game of Thrones, a girl wouldn't have survived much longer in Braavos.

Which brings us right back to why the Waif killed Lady Crane on Game of Thrones. In her personal vendetta against Arya, the Waif wanted to hurt her badly. It wouldn't have been enough to just go in and take Arya by force, but she had to kill Lady Crane first, getting to Arya on a deeper level. Arya's been without a mother figure in her life for a long, long time. Lady Crane, after Arya made the decision to spare her life, sort of filled that void, especially when Arya was stabbed by Waif and on the run. Lady Crane's motherly tenderness was definitely not lost on viwers at home, and Arya noticed it as well. Though it's a shape-shifting game of lies, deceit, and more lies, Arya Stark is a girl who deeply misses that motherly role in her life. And Waif knew that — which is exactly why she killed her.

But instead of just booking it out of Braavos, Arya led the Waif into a trap of sorts and killed her. For her own safety, sure, but maybe for payback too.