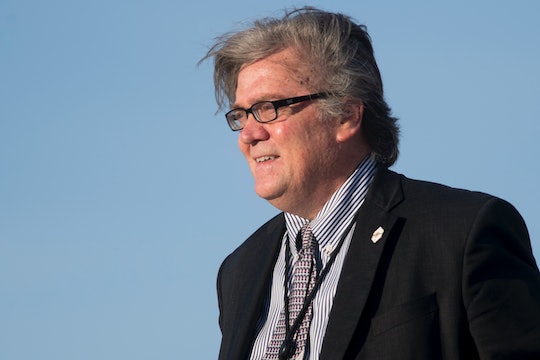 Here's Why Trump May Have Removed Steve Bannon

President Donald Trump has reportedly decided to dismiss Steven Bannon from his duties as White House chief strategist, according to a New York Times report on Friday. But why did Trump remove Bannon? The reasons are unclear, but the move is raising eyebrows in the wake of the deadly, hate-filled protests in Charlottesville, Virginia.

Two administration officials initially told the Times that Trump had planned to remove Bannon from his post, though conflicting reports claim the embattled adviser had filed his resignation earlier this month. White House Press Secretary Sarah Huckabee Sanders later confirmed Bannon's departure from his post as chief strategist, effective immediately, but failed to indicate whether he was forced out or quit, according to CNN.

Huckabee Sanders said in a statement,

White House Chief of Staff John Kelly and Steve Bannon have mutually agreed today would be Steve's last day. We are grateful for his service and wish him the best.

Bannon has had a tumultuous seven months as Trump's top political adviser, clashing with almost everyone in the administration. So his exit is not particularly surprising to Washington insiders. According to the Times, rumors have long swirled that the "alt-right" provocateur would be ousted from his role.

But the explosive events over the last week seem to have been the tipping point that ended his White House career. As Mother Jones reported last year, Bannon helped propel white nationalist and neo-Nazi ideology into the mainstream while at the helm of Breitbart News, a far-right conservative news outlet. And critics believe it's Bannon's white nationalist leanings that influenced Trump's off-color remarks following the bloody, hate-filled rally in Charlottesville that resulted in the death of one counter-protester, according to Newsweek.

Bannon's departure also comes on the heels of a strange and surprising interview the former adviser gave to the progressive magazine, The American Prospect. According to Vanity Fair, Bannon talked about everything from having a trade war with China and contradicting the president's statements on North Korea. He also described white nationalists and neo-Nazis as "losers" and "a collection of clowns." (Didn't we see this situation happen before? Oh, yea, with Anthony "The Mooch" Scaramucci.)

Then there's also the rumor that Bannon is one of the main White House leakers. At least, that's what Trump suspects, according to the New York Post.

Whatever the reason behind Bannon's exit, his departure as White House chief strategist is bound to shake things up within the Trump administration. But for critics calling for his termination, it's welcomed news from a White House that continues to normalize white supremacist ideology to the detriment of the public it purports to love.