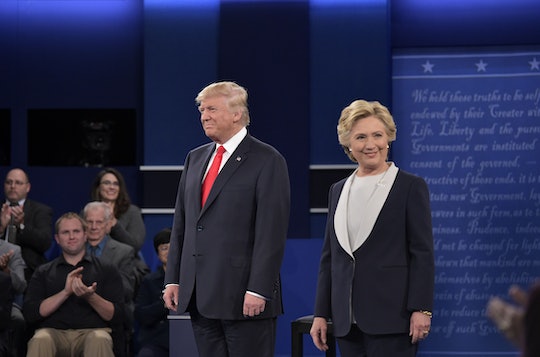 The absence of a handshake wasn't entirely surprising this time around, considering Trump and Clinton didn't greet each other with a handshake at last week's meeting, either. Although they ended that night with a polite handshake, what happened during the second debate was anything but pleasant — and tension has only grown in the time since.

Fueling that were Trump and Clinton's invited guests for the final presidential debate: On Trump's guest list were President Obama's estranged brother, the mother of a Benghazi victim, and others whom the Trump campaign CEO promised would "expose Bill and Hillary's sordid past.” On Clinton's side, the invitees included GOP-defector Meg Whitman, Mexican immigrant and former Trump employee Ofelia Diaz Cardenas, and even Kareem Abdul-Jabbar.

The candidates weren't the only ones who shunned a traditional handshake during the final debate, either. For the first time, the spouses and other family members of Trump and Clinton didn't shake hands. As The New York Times reported before the debate, the Clinton campaign asked the family members file into the room from opposite sides and go directly to their seats so as to avoid an awkward run-in between Bill Clinton and some of Trump's guests. That was just one of Clinton's tactics to prepare for the contentious night. As her spokesman Brian Fallow said, "Whatever scorched-earth tactics he has planned for the debate, we will be ready and she will be unfazed."

As expected, both Clinton and Trump went at each other pretty hard during the debate. Take, for instance, when Trump was questioned by moderator Chris Wallace about whether he would concede the election if it is determined Clinton won: During the first debate, Trump said he would accept the outcome. But by the final debate, Trump said he is keeping everyone in "suspense" about whether he would contest any results.

After that and other feisty encounters, Trump and Clinton didn't even end the night with a handshake, which was a first and went to show there is really very little remaining decorum between the candidates.

As for when Trump and Clinton will meet next — and if there will be a handshake then — it's anyone's guess. From the sound of things, neither candidate would be keen to congratulate the other in person when the election is done.