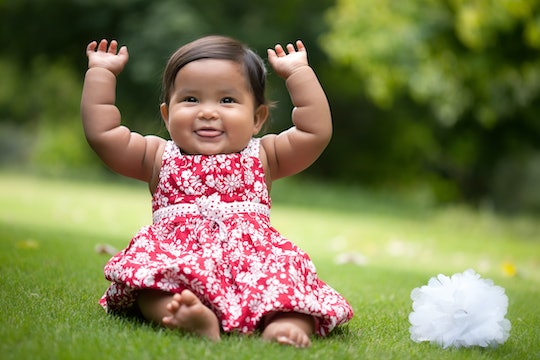 They do it in your face and spit all over you. They do it with food in their mouths and require an outfit change. Once they learn how, babies seem to blow raspberries all the time, but especially when they get to make it messy. But why do babies blow raspberries, anyway? It’s actually a natural part of language development, and experts say it’s a crucial part of learning about conversations.

When a baby blows a raspberry, they’re actually practicing a number of fine motor movements adults take for granted. They’re not only using their lips and tongue, but as Martinez Chadrom says, it’s about coordinating much more. “It’s a way for babies to start learning how their muscles and mouths work, like their lips, their tongue, and their cheeks, and figuring out what they have to do to move them, and how they move air through from their tummy to their vocal tract. They’re figuring out how everything coordinates to make sounds, bubbles, and raspberries,” she says.

Experts say babies start blowing raspberries by accident. Once they hear the sound and like it — or get a laugh out of an adult because of it — they try piecing together how to make it happen again.

“I think it just happens by chance, and they figure out that was a fun sound, that they can actually make this happen, and what they need to do to make certain sounds,” Martinez Chadrom says. “They realize it’s social, too. When they do it, people laugh and they get attention. It’s a combination of doing something, realizing they can do it on their own, and how other people perceive them when they do that.”

As important as it is for babies to practice their berries, it’s just as important for parents to do it back. That’s right — having a raspberry back-and-forth is good for your baby’s development. Not only will it give their muscles more practice, but it starts building important language skills.

“At that age, you learn that language and making sounds is social: you do something, and then someone reacts to you, or begins a back-and-forth,” says Martinez Chadrom. “We think of that as a precursor to conversation, where you say something, then wait for the other person to respond. It begins the foundation of social interaction and language, and how enjoyable it is to get that response from other people.”

And yes, while it may be frustrating when your little one practices raspberry-blowing during meal times, it’s important for parents to encourage it anyway.

“You always want to encourage any face-to-face interaction. You want to model and have the baby imitate you with sounds and motor movements,” explains Martinez Chadrom. “Sometimes it happens right in the middle of meals when they’re trying out their applesauce, but that’s part of the experiment. ‘How does it feel when I get food all over my face, and what reaction do I get from Mom and Dad?’”

Once your baby begins blowing raspberries, it’s time to start practicing some words and sounds. Other signs your baby is ready include tongue clicks and lip smacks. Martinez Chadrom calls these oral motor movements. “Oral motor movements are a good sign your baby is ready to start practicing small sounds,” she says. “In terms of language stimulation ideas to facilitate development, usually the vowels start first, by cooing back and forth. Then come nasals, like Ms and Ns, then that leads to consonant-vowel combinations, like ‘ba' and ‘ga.’ Those are all the sounds we like to try to have parents model for babies to get a back-and-forth going.”

Martinez Chadrom adds that blowing raspberries strengthen the same muscles that help with feeding skills later. That makes it doubly important. “All of those movements help strengthen the oral facial muscles, not only for speech but for eating when using utensils and lip closure when drinking from an open cup.”

And hey, you just thought it was a cute sound your baby made.