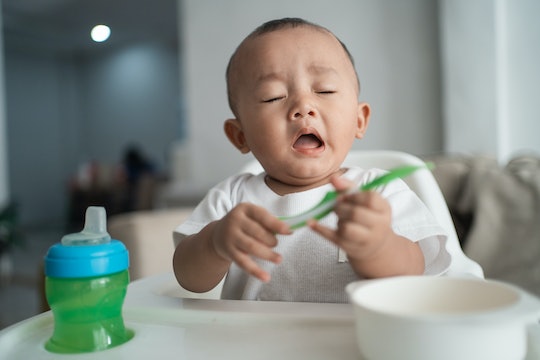 Why Do Babies Fake Cough? Tots Can Be Pretty Tricky, Apparently

Have you ever been hanging out with your baby, who seems perfectly healthy, and they suddenly start coughing for no apparent reason? You might be used to an older child faking sick, but why do babies fake cough? Don't bust out the humidifier quite yet because, as it turns out, they absolutely do.

For babies, everything is brand new and exciting, from wiggling their toes, to smacking their lips, to coughing on purpose (not instinctively). "Typically, around four to six months of age, infants begin to be more attentive and involved with the world around them," pediatrician Amy Liu M.D. tells Romper. "As a result of this normal development, infants will be eager to interact with the world with all its senses (touch, sight, sound, taste, and speech)." This desire to interact includes communicating with other people.

Since they can't use words yet, babies will try to find other ways to communicate, like crying or coughing. As Whitney Casares M.D. tells Romper, babies "notice others around them coughing and they mimic what they see and hear." So, just like your baby tries to mimic your hand gestures when you wave to them, they're also trying to mimic the sound of a cough.

It's not only about communication, though. Babies are smart and they pick up on people's reactions to things. Like when they cough, Dr. Casares says they notice that "adults tend to pay close attention to them." Dr. Liu likens this behavior to another one parents love so much, the dropping game. "When kids drop something on the ground and you pick it up immediately, initially, [you] may find it funny," she says, and your baby will pick up on that reaction. After picking up the object 10 times, it's not so much fun anymore... but "the child does not know this and thinks that it is a game," says Dr. Liu. So, if you jump every time your baby coughs, it will encourage them to fake cough again, and again, and again.

It should be noted that, of course, that not every cough is fake. You can still be vigilant about your baby's health, but just try to reign in your reaction as much as you can. "Consider seeing a physician is if the cough is persistent or associated with other symptoms [like] fevers, difficulty feeding, gagging while feeding, vomiting, cold symptoms, [or] breathing concerns," says Dr. Liu.

If your baby does fake cough, chances are good your reaction will be met with a cute, gummy smile. Enjoy it now, because it won't be long before they're a preschooler trying to convince you they're suffering from every ailment they can think up.

Amy Liu, M.D., MPH, Assistant Professor in the Department of General Pediatrics and Adolescent Medicine at the University of North Carolina School of Medicine