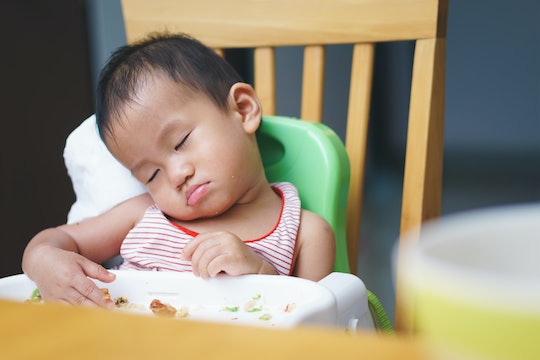 There’s something so adorable and #relatable about your baby falling asleep in their high chair, still clutching that handful of Cheerios. But is it normal for a baby to fall asleep while eating solids? Experts aren’t totally sure what causes what some parents notice as mid-lunch naps, but there are some theories.

“We all can get a little tired after big meals,” says Randy Thornton, M.D., pediatrician at Jacksonville Pediatrics and Wolfson Children’s Hospital of Jacksonville, in an interview with Romper. “Babies, for the first year, they sleep a ton. Gosh, the first few days they can sleep up to 20 hours a day. Most babies start solids around 6 months old. For babies, it’s just cyclical. They eat, they sleep. It’s totally normal. It may just be they’re getting tired.”

Christine Stevens, children's sleep consultant and owner of Sleep Solutions by Christine, tells Romper in an interview that it’s important for parents to watch for signals of their baby’s sleepiness. As they begin eating solids during meals, they may not simply doze off while nursing or bottle feeding as they have before.

“At a year old, you get into a single afternoon nap, but before a year it’s normal to have multiple naps a day,” says Stevens. “If you're finding that your baby falls asleep while eating, you're likely misreading your baby's sleep cues that they're tired and are missing a chance for a nap. Watch for baby rubbing his eyes, yawning, getting fussy, or turning away from you to know that it might be time for a nap.”

Thornton says as babies are learning to eat solids, they may take longer to feed, and lunchtime may begin to cut into nap time. Stevens seconds this idea, noting that when babies start eating solids, it’s as much about practicing motor skills and eating skills than getting it all down the hatch.

“Formula or breast milk should be the primary source of nutrition for your baby for the first year. When they start solids, it's the practice of eating solids foods more than nutrition.”

But if your baby falls asleep often while eating their solids, how can you be sure your baby is getting enough to eat? “The rule of thumb is to let the child be the judge. Feed them when they’re hungry and feed until they’re full, and 99% of the time they’re fine. If they’re falling asleep while they’re eating, it’s just time for bed, and they’re probably full anyway,” says Thornton.

While it may not be a major concern on the surface, Stevens recommends asking your child’s doctor any questions you have just in case it could mean something more serious is going on.

More Like This
Even If Your Baby Sleeps Better in Your Bed, It’s Still Not Recommended
Does The FDA's Plan To Limit Lead In Baby Food Go Far Enough?
Covid Vaccine “Deserts” For Kids Under 5 Make It Almost Impossible For Parents To Find Shots
Why Does My Newborn Shake Sometimes? A Pediatrician Explains
What Parents Are Talking About — Delivered Straight To Your Inbox