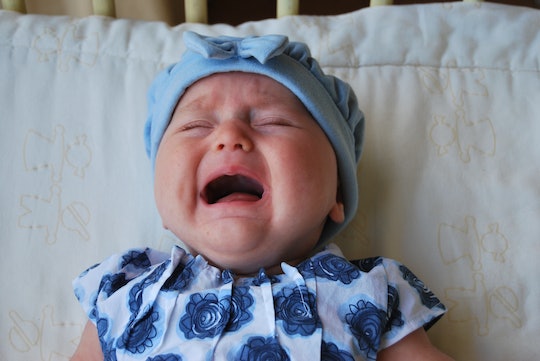 Why Do Babies Get Colic? There May Be A Few Reasons

Nobody can fully prepare for parenthood, but every parent has a healthy expectation of their baby's needs. You know your baby is going to cry, you know there are going to be sleepless nights, and you know that there are going to be tough days. What nobody honestly expects is for their baby to be fussing, crying, and inconsolable for hours on end — nobody expects their baby to get colic. But trying to find an answer to why babies get colic can be just as frustrating as colic itself.

According to Parents, 15 to 25 percent of babies experience colic and it usually peaks around 6 to 8 weeks old and can last until they are 3 to 4 months old. Not to be a Debbie Downer, but man, that's a lot of crying, right? The worst part is that there is little that can be done to comfort your baby. Unlike crying because they are hungry, wet, tired, or hurt, this type of cry can't be satisfied with one of your go-to methods like a bottle or a cuddle. It seems to come out of nowhere, happens repeatedly, and often around the same time each day.

So if you can do anything to prevent it, you would, right? Turns out it's not that easy. The truth is, nobody really knows why babies get colic. According to Mayo Clinic, there are a few theories as to why babies get colic, but there is really no definite research backing any of them. Researchers think it could be caused by allergies, changes in the digestive system, an immature digestive system, and even anxious parents, but Baby Center referred to colic as a total mystery. There is no correlation between a baby's sex and their likelihood of developing colic nor is there any difference between breastfed babies and formula-fed babies.

Basically? There's no concrete evidence that determines why a baby gets colic. One study did find that mothers who smoke are twice as likely to have a baby with colic, but because there are so many variables surrounding colic, it's hard to use that as the reason babies get colic, especially when non-smoking parents experience it as well.

The theory you may here most often is that babies with colic are just overstimulated. What to Expect noted that babies can become overwhelmed by all of the things they are seeing and hearing each day and they have to release those feelings by crying. Because colic is often triggered in the evening hours, this theory makes sense since the end of the day may be when your baby is just officially done with everything.

It's frustrating that colic has no direct cause, but it can also put you at ease. Honestly, other than being reassuring and comforting to your baby, there's not a lot you can do. Colic isn't your fault and while it may also be overwhelming and frustrating to you, you don't have to worry about fixing it. Eventually, your baby will grow out of it. In the meantime, ask for help if you feel yourself getting too frustrated with your baby and take lots of breaks. If your baby's going to cry while you're holding him, then it's not a big deal if he also cries in his crib while you take five minutes to breathe. Colic is just a phase and you, and your baby, will get through it together.