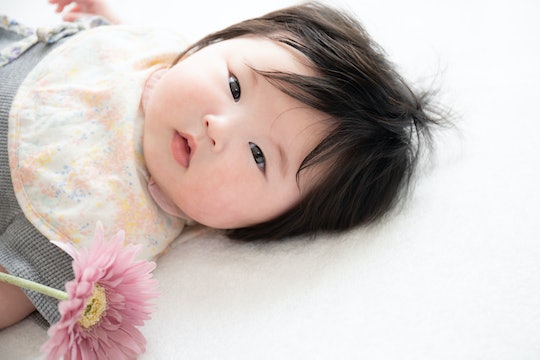 There are a million things about babies that make them absolutely irresistible: their soft skin, the way the tops of their little heads smell, and (perhaps most of all) those adorably squishy, chubby cheeks. Some babies have more sizable cheeks than others, to be sure; I couldn't take my daughter anywhere without random strangers wanting to pinch her poor little face. But all infants seem to have puffier cheeks than kids or grown-ups. So why are babies' cheeks so chubby? It turns out this feature has an important function — or more than one, actually.

Perhaps unsurprisingly, those signature cheeks are directly related to feeding, whether by breast or bottle.

"The cheeks contain muscles that develop and get larger based on the way and how much babies eat," Sahira Long, M.D., the Medical Director of Children’s Health Center Anacostia in Washington, D.C., tells Romper.

"Until the diet is primarily solids, babies do mostly suckling (if breastfed) or sucking (if bottle-fed) and swallowing," Dr. Long continues.

"That repetitive motion contributes to the size of the muscles that are covered with a layer of fat and skin. The muscles and fat in the cheeks also provide cushion for the tongue which helps to keep it in place to do its job."

As you might have noticed, compared to the rest of her mouth, a baby's tongue is large — which helps to expand contact with breastmilk. So those cheeks are pretty genius, when you think about it... especially because they're important for other reasons, too. As the Oxford Mail reported, one study out of Oxford University discovered the characteristics that make an infant cute (chubby cheeks in particular) also help to ensure their survival by triggering a care-giving response in adults.

"Infants attract us through all our senses, which helps make cuteness one of the most basic and powerful forces shaping our behavior," Professor Morten Kringelbach of Oxford University's Department of Psychiatry, a lead researcher on the study, told the Oxford Mail.

"This is the first evidence of its kind to show that cuteness helps infants to survive by eliciting care-giving, which cannot be reduced to simple, instinctual behaviors," he continued.

"Instead, care-giving involves a complex choreography of slow, careful, deliberate, and long-lasting prosocial behaviors, which ignite fundamental brain pleasure systems that are also engaged when eating food or listening to music, and always involve pleasant experiences."

"The appearance of the cheeks (their cuteness) is part of a baby’s survival instinct that triggers a caregiving response biologically in most adults," agrees Dr. Long.

Interestingly, parents aren't the only ones who are powerless to fight against the influence of cuteness. Research published in the journal Trends in Cognitive Sciences showed that both men and women without children are also affected by those chubby cheeks. And we even know why you're overcome with the impulse to squish that little face: Scientists at Yale University called this reaction "cute agression," and it helps us to maintain emotional balance, according to Metro.

"They seem to take place when people are overwhelmed with strong positive emotions, and people who do this seem to recover better from those strong emotions."

So not only are babies' chubby cheeks part of a complex biological design, but the way we respond is also part of our physical and psychological makeup. Could it be said that babies with the chubbiest cheeks have some sort of evolutionary advantage? Perhaps, but when you think of all the other outrageously cute features common to all babies (little toes!), I'm guess the playing field is pretty even.