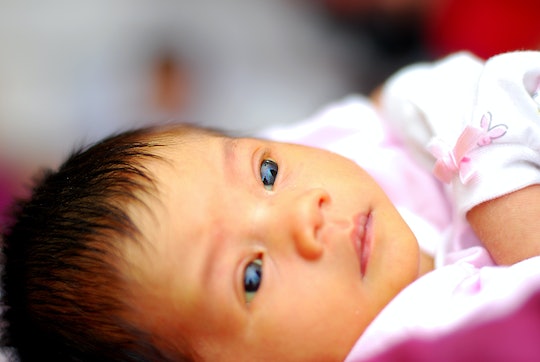 Why Do Babies Have Yellow Eyes? There Are A Few Reasons

The first few weeks of parenthood may be a blur, but there’s one thing you can probably recall in great detail — your baby’s eyes. I can’t even estimate the number of hours I spent staring into my newborn daughter’s eyes, especially at three in the morning. You can probably recall every exact detail of your child’s eyes, the exact shade of blue, or the way the look when they’re smiling. So you’re probably going to notice fairly quickly if your baby has yellow eyes. But is there a reason to panic? Why do babies have yellow eyes and is it something to be concerned about?

If your baby is a newborn, their yellow eyes are most likely a product of jaundice. According to the Mayo Clinic, this usually occurs between day two and day four of your baby’s life. Jaundice is caused by a buildup of bilirubin in the blood and is extremely common, affecting about 60 percent of babies, according to March of Dimes. With a newborn’s immature liver, it’s unable to filter out all of the bilirubin, which is yellow-pigmented, from the blood stream, causing an infant’s skin and eyes to take on a yellowish tint. For most babies, it’s a mild case and is treated fairly easily with light therapy that affects the structure of the bilirubin molecules so your baby can pass them through their urine and stool. When you’re discharged from the hospital, your baby has already been checked thoroughly for jaundice and will be looked over again at their first pediatrician appointment. It usually lasts for about three weeks and, at that point, all of the symptoms like yellow eyes should have cleared up.

A more serious reason for yellow eyes? Sickle cell anemia. According to the National Heart, Blood, and Lung Institute, this disease is characterized by the red blood cells becoming rigid and shaped like a crescent moon instead of round and flexible. With sickle cell anemia, these red blood cells can become stuck in the blood vessels and can slow or even block blood flow and oxygen from reaching parts of the body. According to the Mayo Clinic, sickle cell anemia symptoms don’t appear until a baby is four months old.

Noticing your baby’s eyes are yellow can be terrifying, especially since so many liver problems can be associated with yellow eyes like Hepatitis C. If your child has been cleared for jaundice, but develops yellow eyes later in their infancy or childhood, it can become something serious. You should contact your doctor immediately if you notice a yellow tint to your baby’s eyes, especially when coupled with other symptoms like fatigue or dehydration.