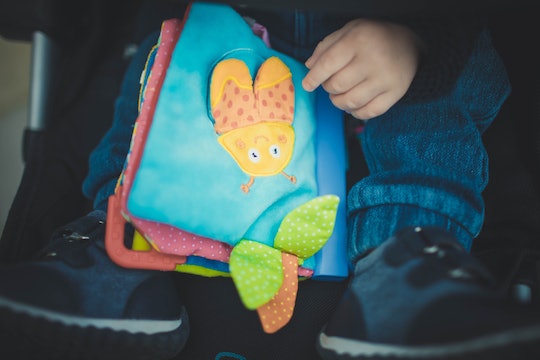 Before I had a human baby, my very first “baby” was a cat named Sam that I adopted as a 4-month-old kitten. And the more I raise and hang out with my human son, the more I feel like babies are just kittens. They’re stubborn and temperamental, like to be snuggled only on their terms, are nocturnal, are distracted by shiny things, and love crinkly toys. At least mine does. Why do babies like crinkle toys? Is my son being influenced by our cats? How do crinkly toys affect babies' development compared to other toys?

Maybe it’s like our infatuation with bubble wrap — the texture, the sound, the satisfying pop? According to Dr. Daniel Ganjian, a pediatrician at Providence Saint John’s Health Center in Santa Monica, California, it might just be that simple. "Babies enjoy toys that allow them to use many of their senses. Crinkle toys are fun because they make noise easily, with very little effort."

Ever wondered why your baby stays so busy and interested in a crinkle toy? That's pretty simple, too. "Kids learn pretty quickly that they can make sound," Ganjian says, and he suggests starting your kid on them around 3 to 4 months. He also recommends purchasing crinkle toys that are black and white with just lines to start off. "Many toys on the market just overstimulate babies and do not help with development."

But crinkle "toys" don't come in just one type of material — apparently anything that makes this kind of noise is a plus. Plenty of moms on a Baby Center forum were discussing just how much their babies love those crinkly toys, but the common favorite was just paper. One mom said her baby loves paper and "will gum and tear up a magazine in seconds. If I need to calm her down, I just give her a piece of paper and she cheers right up! Totally weird I think ... Also, I've tried the crinkly toys and that just doesn't do it for her like paper." Interesting — and also like cats. (But you know, be careful about giving your babies paper or anything they can choke on.)

If you'd rather give your baby a toy instead of paper, Amazon has some really awesome and inexpensive ones to choose from, including a product that's actually called Baby Paper. Y'all, there's even a Baby Newspaper so your baby can have the fun of "reading" the newspaper without inky hands, fingers, mouths, and face.

Other toys Ganjian recommends for development include "toys with black straight lines at 2 months and wiggly lines at 3 months, and then introduce toys with minimal colors at 4 months. Many of these toys might seem boring to an adult, but that is all a baby really needs and should be using." Ganjian also notes that "sound toys should be limited to toys that squeak, rattle, or crinkle. No need for toys with many lights and sounds. These toys just overstimulate your child. For a great list of toys and when to progress to the different toys, read The Secrets of a Baby Whisperer by Tracey Hogg."

So babies like crinkle toys for the same reason they like most toys — because they're using a lot of their newly discovered senses all at once. Even if you think your baby needs more stimulation, they'll be just fine with toys without the bells and whistles... just some crinkles and lines. (Your ears are thanking you.)