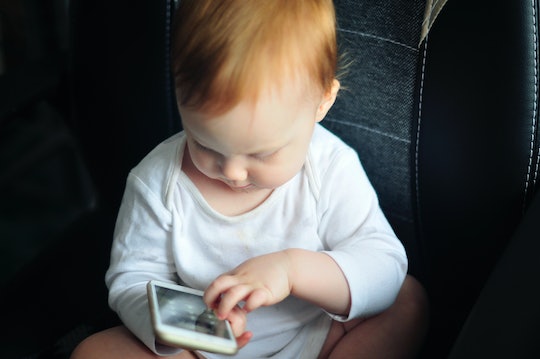 Plenty of parents — myself included — can attest to their babies snagging their smartphone right from their hands at one point or another. The love babies seem to have for cell phones is matched only by their love for playing with the remote control. But, why? Why do babies love cell phones so much?

Babies like to grab pretty much anything they can get their chubby little fingers on, so are their parents' phones simply something they see within their reach, or is there more to it than that? Romper asked experts to explain exactly what it is about cell phones that babies love, and what this says about their development.

"Babies are attracted to the bright colors and lights of smartphones," Dr. Michael Mintz, clinical psychologist at Children’s National Hospital tells Romper. "Our phones are extremely stimulating and, in a sense, unnatural — that is, to say, the lights and images that come from our phones are unlike anything a child might see in their natural environment. As such, our brains are not designed to engage with this level of stimulation, which is one reason why it is so easy for people (adults and kids alike) to get addicted to them."

Experts agree that the degree to which a baby interacts with your cell phone can have an impact on their development not only because of the stimulation the screen is providing, but how they interact with the phone in other ways as well.

"In the first year of life, observing and processing visual and verbal stimuli such as lights, faces, motion, and sounds are important steps in developing the neural pathways that allow children to understand and process their surroundings. Infants' brains are primed for perceptual input such as light and language," Dr. Sadie Hasbrouck, a psychologist with Children’s Hospital Colorado tells Romper.

Hasbrouck explains that the way babies learn allows them to explore the "lights, motion, sounds, tastes, touch, and smells" they encounter in multiple ways in order to help them develop. "Infants will try different methods to explore phones on their first few interactions — putting it in their mouth, poking at it, dropping it. They quickly learn that watching is the best method of interacting with a mobile device due to the high volume of engaging visual and verbal input," Hasbrouck says.

When my boys were babies, they were absolutely enthralled with my smartphone. They would stare at the bright screen for ages if I let them. (Which — let me be clear here — I sometimes did let them just to keep them from screaming in my face.) But, the screen is only one part of the equation when considering why babies love cell phones.

"As babies approach the first birthday, they start to gain some understanding of how important our phones are to the adults around them. They observe adults spending long periods of time looking at their phones, and they probably notice how frequently we tend to have our phones in our hands," Mintz tells Romper. "Perhaps more importantly, babies and toddlers notice how strongly we react when they grab our phones. The more emotional and intense our reactions are (such as when we exclaim or scold our kids), the more they realize that our phones are very important to us."

Although babies seem to love cell phones, experts recommend limiting their exposure to screen time. The American Academy of Pediatrics recommends parents avoid screen time altogether for children under 18 months with the exception of occasional video chats with loved ones, citing health and developmental concerns such as increased risk of obesity and sleep disruption as the main considerations for young children.

"Apps and video games can be close to sensory overload for young brains. With so much happening on the screen, although it’s interesting, it can also be draining and even addicting," Dr. Gaurav Kumar, pediatrician at LifeBridge Health in Maryland tells Romper. "In my opinion, this kind of sensory stimulation could lead to children having less patience and resilience. Again, it all goes back to wanting our babies to spend time with hands-on learning, playing, and interacting with the people who love them."

The type of learning that could occur when you baby plays with a cell phone all boils down to the type of interaction your baby is having, according to Kumar.

"I don’t think babies under 18 months old should play with cell phones at all. There’s no question that cell phones and touch pads will quiet-down an antsy child, but I don’t think they provide enough meaningful information. Babies less than 1.5 years old learn best by touch and seeing how things fit into the world, not by using apps and video games," Kumar tells Romper. "For instance, if you turn off cell phones and hand them to babies, they will still interact with them. They will open and close them (if they are flip phones); drool on them, turn them around and around, and possibly throw them. That’s how they learn. If phones are turned on, little ones are not exploring with the same results."