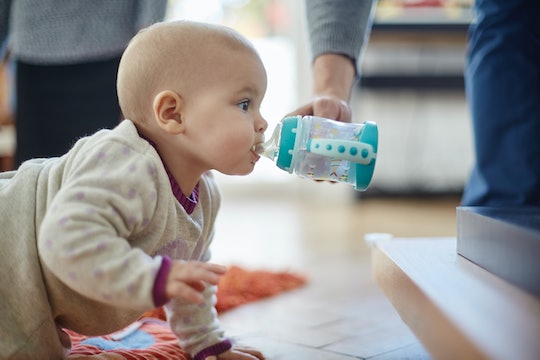 If Your Baby Loves Drinking Water, Here's What Experts Want You To Know

When my boys were babies, they would gulp down pretty much anything in their bottle — formula, pumped breast milk, water, and even air when the bottle ran dry. In fact, they both seemed to actually enjoy drinking water, as weird as that sounds. But babies love drinking water, according to science, and that's why your little one is ready to upturn your entire bottle for a drop.

As it turns out, I'm not the only mom who has wondered why my baby loves drinking water. Concerned parents — especially those of older babies already experimenting with sippy cups — flock to parenting forums to ask questions about their babies and their love of drinking water. One parent on the What To Expect forum even noted that her pediatrician did not have much to offer as far as advice on the topic and said, "When I mentioned [my baby loving to drink water] to my doc, she didn't say no but didn't say yes." Parents of babies who love drinking water definitely worry about when and how their babies should be consuming good old H2O.

"Babies can start drinking plain water from a sippy or open cup at 6 months of age," Dr. Natasha Burgert, a pediatrician based in Overland Park, Kansas tells Romper. "Water is great practice for early cup use. It also helps with the constipation that may come from first foods."

But what about younger babies who seem to love drinking water? "As your infant goes through many changes in the body as it develops the first several months, your baby gets all the water it needs out of formula and/or breast milk," Dr. Jarret Patton, pediatrician tells Romper. "The kidneys are not developed enough to handle plain water until about 6 months of age. Drinking water before that time can lead to a dangerous electrolyte imbalance and water intoxication which can be deadly."

If drinking plain water isn't necessarily the best thing for babies younger than 6 months of age, why do they love it so much? According to Patton, this has everything to do with a baby's natural suck reflex. "During the first few months, the suck reflex helps the baby attempt to drink anything that comes into its mouth, including water," he tells Romper. "The baby is unable to determine if something they are ingesting is harmful or not."

This same reflex could cause your baby to drink more water than they can handle, which can lead to water intoxication, as Patton mentioned. Water intoxication in babies can trigger seizures, a drop in body temperature, irritability, and swelling, according to a report by Alan Greene, MD, FAAP for Parents, so it's critical that parents of babies who love water closely monitor their intake.

If your baby seems thirsty, experts agree that breast milk or formula is exactly what they need to quench their thirst. According to Kelly Mom, breast milk is comprised of 88% water, and even formula-fed babies do not routinely require extra water intake than what they are getting through their feedings. Not only will this provide necessary nutrients for your baby, but will serve to adequately hydrate them without risking water intoxication, according to the World Health Organization's website.

Once your baby is eating solid foods on a regular basis, offering some water with meals is OK, but experts recommend no more than a few ounces per day until they reach 1 year of age, at which point they can consume 8 ounces per day for every year of age, according to CHOC Children's Hospital in Orange County, California. So, no worries if your baby isn't in love with drinking water just yet. But if they are, just keep an eye on their intake to ensure that they stay safe and healthy.

Dr. Jarret Patton, pediatrician and author of Whose Bad @$$ Kids Are Those?

More Like This
The Difference Between The PICU & The NICU
Can You Mix Breast Milk & Formula? Experts Weigh In
Baby-Led Weaning: A Comprehensive Guide To Introducing Solids
Here's How To Keep Your C-Section Incision Dry