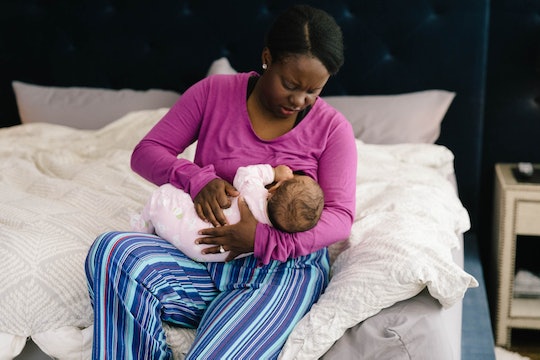 Is Your Baby Puking After Breastfeeding? Here's When To Worry

Baby puke and spit-up can be pretty gnarly. The worst case of spit-up I dealt with was when I worked in a daycare: after feeding the world’s sweetest baby, I stupidly raised her over my face and she spit-up directly into my open mouth. Rookie move. I thought I would swear off babies for good, especially after another baby threw up down my back and into my shirt. Now, I’m sure you have your own throw up horror stories to tell, but should you be concerned if your baby vomits or spits up after breastfeeding? And how do you distinguish between the two? Fun times, right?

According to pediatrician Jarret Patton, vomiting after breastfeeding usually occurs during the first two weeks of your baby’s life. Typically, it’s because for some women, their breasts produce more milk than the baby can drink, which leads to overfeeding and then vomiting, Patton explains. Thankfully, however, “This quickly goes away as the breasts start to regulate the amount of milk they produce based on the infant’s eating habits. If vomiting persists even after a small feed, this could indicate a medical problem and you should consult your doctor for further evaluation,” he says.

So how can you tell the difference between spit-up and actual vomit? There is a difference. Patton says when your baby vomits, it’s more forceful when your baby ejects his or her stomach contents. “It tends to have a larger volume than spit up which comes out more like a dribble out of the baby’s mouth,” he explains. If your little one is vomiting, keep your baby lying on his or her stomach or side as much as possible to “minimizes the chances of the baby inhaling vomit into his or her upper airway and lungs,” advised the American Academy of Pediatrics (APA).

If your baby is vomiting, the APA noted, for the most part, it "will stop without specific medical treatment.” However, you should watch out for dehydration. Patton says, “The key to determining if the vomiting is too much lies in the weight gain and number of wet diapers. If there is weight loss, or failure to gain weight well, see your child’s doctor. Also, if the number of wet diapers decrease, this could signal dehydration and cause a visit to the doctor.” If you do end up going to the pediatrician’s office, the the pediatrician will probably do a blood and urine test, or even x-rays to determine what’s going on, explained the APA.

As far as spit-up goes, what exactly is going on there, and how much is too much? The Mayo Clinic noted that spitting up is quite common among healthy babies and it typically happens during the first three months. Spit-up is when babies “experience their stomach contents coming back up into the esophagus, a condition known as gastroesophageal reflux, infant reflux or infant acid reflux,” the Mayo Clinic explained. "As long as your baby seems comfortable and is eating well and gaining weight, there's little cause for concern.” However, if your baby isn’t gaining weight or the fluid is yellow, green, bloody, or looks like coffee grounds, or starts when they’re 6 months old or older, call your pediatrician immediately.

So it looks like spit-up is very common among babies, and the throwing up usually occurs after breastfeeding if your baby accidentally overeats because you produced more milk than your baby can handle. But don’t worry, your breasts will figure it out and start to regulate the amount of milk that will fit perfectly into your sweet baby’s needs. If your baby is continuously vomiting and shows signs of weight loss or dehydration, make sure to call your pediatrician asap, as that is definitely worth getting checked out.