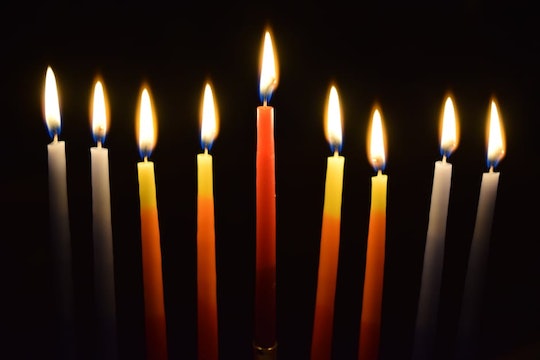 Why Do Christmas Eve & The First Night Of Hanukkah Fall On The Same Night This Year?

Winter holidays are usually close to each other. But this year, Hanukkah and Christmas are pretty darn close. In fact, Christmas Eve and the first night of Hanukkah fall on the same day this year — Dec. 24. Although those who celebrate both will have a lot to do come Dec. 24, those who celebrate just one might be wondering why these two holidays happen on start on the same day this year, giving new meaning to the term Chrismukkah.

The last time that these two holidays coincided was back in 2005 — exactly 11 years ago. Back then, the Houston Chronicle noted that the first night of Hanukkah fell directly on Christmas, which has only happened four times in the past 100 years. For example, just last year, Hanukkah started on Dec. 6, and the year before, Dec. 16. Unlike Christmas, which is set on Dec. 25 every year, Hanukkah changes up.

This is because Hanukkah is determined by the Jewish calendar, which is lunar. That means that the days depend on the moon. Technically, Hanukkah is set on a specific "date" each year — the 25th of Kislev, which is seen as the ninth month of the religious year — but the difference is, Kislev might end up falling in November, or it might fall in December.

Since Hanukkah is a Jewish holiday, obviously it corresponds with the Jewish lunar calendar. Other Jewish holidays also abide by the same rules. Yom Kippur, Sukkot, and Rosh Hashanah — three other big Jewish holidays — also don't have a set day. But, they do fall during a loose time period. For example, you'd never see Hanukkah being celebrated in July.

Since Hanukkah lasts for eight days, it commonly overlaps with Christmas and Christmas Eve — but, having the holiday start on one of the two holidays is definitely a bit more rare. The next time the two will coincide will be in 2019, when Hanukkah will last from Dec. 22 to Dec. 30.