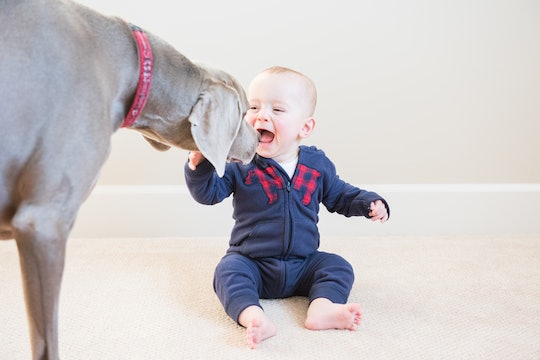 It can be pretty adorable to see a labradoodle pup snarling at any human who dares to reach a hand toward a stroller... like the world's fluffiest little body guard. But cuteness aside, why do some dogs protect babies with such a fierceness?

One need only look to YouTube for proof of canines loyally guarding over bebes. There are several “Dogs Protecting Babies”-style compilations out there that showcase pooches jumping and snarling at any adult who dares to tickle a toddler. In these videos, the dogs get wildly protective, acting as if they believe the tiny human beside them to be a onesied member of their own dog pack. Which they totally do, of course.

As Shelby Semel, a canine expert and dog trainer, tells Romper: “Dogs are social creatures and therefore bond tightly with their human pack.” When a dog is closely bonded with a family, it will sometimes regard a baby as the latest addition to its own personal animal den. As Animal Planet further explained, dogs are keenly aware of the hierarchy within their pack, and are instinctively wired to watch over the weaker members. So they correctly identify the drooling, flailing creature that's been brought into the home as not exactly being the alpha, and in need of their protection.

This is not to say all dogs adore kids. As a child, my family had Cocker Spaniels. My lasting memories of Bingo and Cujo (clearly we felt the need to cover the spectrum of canine good and evil with our naming strategy) are mainly of them stretched out on our porch issuing low, guttural growls every time my siblings and I attempted something they considered aggressive, like, oh, trying to walk through our own front door. My point being — one shouldn’t just assume Rex is going to instantly adore Junior, and leave him to howl lullabies at the crib. (And on a serious note, The American Kennel Club recommends infants never be left alone with dogs.)

Some of how a dog responds comes down to temperament. Per Semel: “Dogs who are too nervous about being near the new baby may not end up protective. This is perhaps less about breed and more individual personality and sociability. For sound sensitive or generally unsociable dogs, a new sibling can be very stressful. Also, friendly lap dogs or lazy dogs may enjoy the baby, but not have the urge or necessity to jump up to defend.”

Though breed can also come into play. Semel says some dogs are “protective or territorial by nature based on genetics and breed. A German Shepherd has guarding instincts, and an Australian shepherd has herding instincts. Both of these can translate to protectiveness of family.”

And of course, a dog’s training plays a huge role. Part of this training comes via example: dogs pick up on parents’ voice and body language around babies, and thusly learn that the child is someone who is to be treated gently and with extreme care. (There are lots of other training techniques new parents can and should look into when introducing a dog to a baby. For example, the American Kennel Club recommends giving the dog the baby’s blanket to smell to familiarize it with the scent.)

Another reason lots of pups are into babies? Because — newsflash — dogs crave attention. And guess who else are total attention fiends? Freakin' babies. So in many regards, a hound and a baby are a match made in heaven. Which may also be why a dog is more willing to put up with annoying behavior from a wee one. Ever see a toddler grab a fistful of a dog’s fur, and the dog just sit there like the world’s most patient playmate, like some Supernanny on Xanax? While it's cute to see, Semel says it's not really cool, and she personally wouldn’t allow it. “Very rarely does a dog actually love to be poked and prodded. However some dogs just don't mind it from their humans.”

Sometimes parents may feel their pet is overly protective of a child, which can also be a problem. If they snarl like they are going to gnaw off your lactation consultant’s hand, for instance, you might want to consult an actual dog trainer for tips.

For the most part though, the puppy/baby combo is a pretty big win. Business Insider recently reported on a study that shows how palling around with a dogs gives humans a solid hit of dopamine, and according to Science Daily, dogs can even boost a child's immune system. And pictures of puppies playing with small children could well be considered a vital resource in today’s world. Sometimes, after scrolling through the news, there’s nothing people need more than a shot of a terrier snuggling up to a toddler.