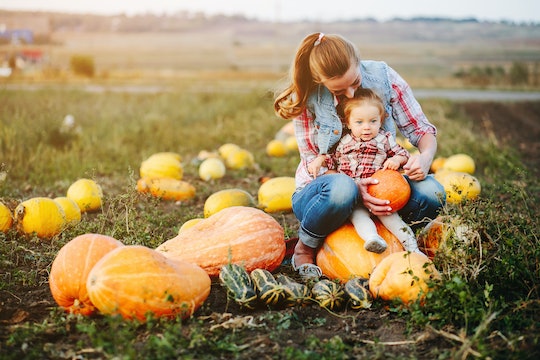 Your #Basic Obsession With Pumpkins Is Actually A Good Thing, According To Experts

It's almost fall, y'all, which means pumpkins are popping up left and right in stores, restaurants, and the internet. I can barely turn my head in the grocery store without getting a whiff of pumpkin spiced something and seeing that big, round, orange gourd that sparks so much joy in my fall-loving heart, and I am absolutely here for it. I know I'm not alone in my adoration of all things pumpkin, and being #basic about this has never bothered me at all, but exactly why do I love pumpkins so much?

The main reason people feel such a strong connection to pumpkins has to do with the nostalgia we feel about the fall season itself, according to psychologist and licensed clinical social worker, Dr. Danielle Forshee. "Some of the nostalgia of the fall season comes with the positive memories and experiences that we have associated with the season itself. The fall season is a time of apple picking, pumpkin picking and carving, fall festivals, and spending a lot of time with loved ones," Dr. Forshee says.

Because of the pumpkin's prevalence in fall activities, you could definitely call the pumpkin the unofficial symbol of the fall season. So when you see a pumpkin, smell a pumpkin baked good or latte, you're likely going to associate this with the memories that the fall season creates each and every year. The sense of community created when you gather your kids to carve a pumpkin or take them to a pumpkin patch to capture adorably fun Instagram shots are memories that will last a lifetime. Each of these instances creates a bond to the fall season that pumpkins serve as a reminder of.

Proof that our culture loves pumpkins so much lies in the amount of pumpkin products we consume each year. More than $6.9 million worth of pumpkin products were sold during a 12-month period ending Aug. 25, 2018 in the U.S., according to Nielsen. Anthony Thomas, executive chef at Chef Anthony Events says that pumpkin dishes are most popular during the fall season because of their nostalgic associations. "In my experience, the iconic holiday season pumpkin pie is generally the sole reason for many people’s association between pumpkin flavor and nostalgia," he tells Romper. "Since pumpkin pie isn’t as popular during non-holiday parts of the year, this time of the season makes people's association with pumpkin even stronger."

Chef Thomas also tells Romper that pumpkin's versatility lends itself to inclusion in dishes that people may not think of including it in during other times of the year when pumpkin is not as available. "The fall season presents people with a chance to utilize pumpkin and put a unique twist to everyday recipes used throughout the year," Chef Thomas says. "I find that pastries and lattes are definitely the most popular dishes used with pumpkin. During the holiday season, when pumpkins are most popular and more readily available, utilizing pumpkin for pies is one of my favorite go-to recipes for the fall."

Not only are pumpkin dishes delicious, but Dr. Forshee says that there are known health benefits for consuming some of them. "Pumpkin seeds have been found to be mood boosters, fighting depression and anxiety," she tells Romper. "Additionally, fall spices such as cinnamon, which is usually found in our fall lattes, can boost mood simply from the smell." So go ahead and order a venti, folks. Those pumpkin-inspired drinks and snacks are only around to remind you of all of the nostalgic vibes of your favorite season for a short time.