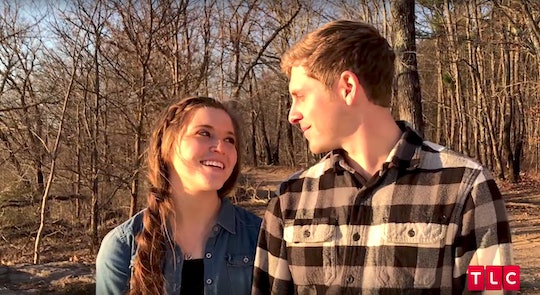 What's Up With Joy-Anna Duggar's Shared Insta Account With Her Husband?

Seemingly out of nowhere, fans of the nation's hugest reality TV family are getting a huge helping of Joy-Anna Duggar and her new husband, Austin Forsyth. Between the couple's courtship and subsequent engagement, their wedding in May followed by the August announcement that they're expecting a baby, the 19-year-old Counting On star and mom-to-be is giving fans their current dose of what the family is known for: committed relationships and procreation. And these two young lovebirds have taken showing just how bonded they are by melding their social media presences. Welcome to Joy-Anna Duggar and Austin Forsyth's shared Instagram account.

Yep, it seems like the exposure to these two never stops if you're a Duggar nerd, and you don't even have to go to two different web pages to get your daily fix between episodes. But what prompted these newlyweds to merge on Insta?

After all, they both have their own accounts with upwards of 20,000 followers each. However, the timing of the very first pic posted to the "austinandjoyforsyth" account offers a significant clue: The simple snap of the two in the car went live May 31, just five days after their big wedding day.

Although it can often be difficult to tell which half of a couple is doing the talking, so to speak, in a shared account, it seems pretty clear that Forsyth wrote the caption for their Insta-debut as husband and wife. Here's what he had to say:

So thankful for my wife!! Whoso findeth a wife findeth a good thing, and obtaineth favour of the Lord. (Proverbs 18:22)

So, maybe Duggar and Forsyth decided that, after marriage, sharing an Instagram account was the next logical step in their relationship.

The two went on two document their honeymoon in Switzerland and to share a cute shot of them celebrating their one-month anniversary in Israel. And not too long afterwards, they would take to the account to share the news that they had a baby on the way. Duggar apparently took the reins for this one, writing, in part: "Austin and I are SO thankful to announce that we are parents!! Even before we were married we prayed that God would give us children and we are so blessed that he has given us this baby!"

Now, there's little doubt that this lovey dovey shared Instagram situation tickles some fans in all the right ways. But not everyone is impressed with the practice of sharing a social media account with a spouse or significant other.

In a column for The Guardian, Megan Carpentier wrote a couple's getting a two-for-one email account broadcasts to the world that their "relationship is entirely too codependent." Worse, sharing social media accounts can chip away at a person's ability to build their own distinct online identity, Holly Baxter argued in The Telegraph. And a couple's shared Facebook account can point to serious problems in the relationship, as neuropsychologist Sanam Hafeez told HowStuffWorks:

These couples are able to openly share their social media because they have established a foundation of trust and security in each other. Partners as such can be perceived by others as combining their virtual identities into one. By doing so, it prevents unwanted solicitation from any individual seeking out a romantic relationship.

There's no evidence that any of these is the case for Duggar and Forsyth, though. Actually, it seems like their fans are gobbling up the joint Instagram thing, which certainly could have played a role in their decision to keep it up. See, Forsyth's Instagram account and Duggar's Instagram account — the individual ones — have about 50,000 followers combined. The shared account, on the other hand, boasts a whopping 368,000. So, you do the math.