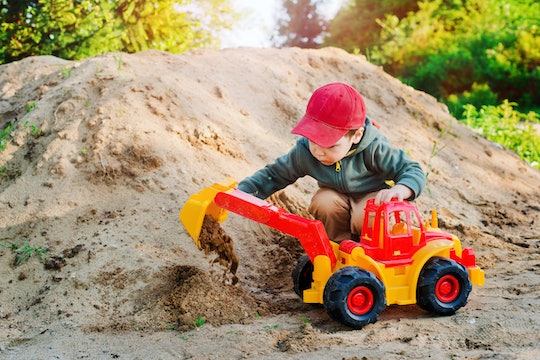 No matter what sex your child is, for the most part, I’ve noticed they’re all infatuated by big bulldozers, dump trucks, construction equipment, and diggers. In fact, my son is only 11 months old, and when we go for our daily walks he squeals with delight when we pass by the garbage truck or the diggers at the construction site of the new McMansions down the street (or maybe he is as irritated as I am about the McMansions and he is yelling in disgust). But anyway, there’s a good reason your kid is obsessed with diggers and bulldozers and big construction equipment, and it’s definitely not a gender-specific thing.

More Like This
Apple Card Family: How It Works & What Your Kids Can Learn
The 7 Best Water Tables For Your Little Ones
15 Face Masks For Kids That Are Cute, Comfortable, & Get The Job Done
These Couches Are Perfect For Climbing If The Nugget Couch Is Sold Out

Clinical psychologist, teacher, mom, and author Dr. Carla Marie Manly tells Romper in an email interview that kids love heavy equipment for a variety of reasons, but the highlights include the fact that they’re loud, they love giant-sized things, and they love that they can hold and “own” mini-sized versions of these larger-than-life objects.

“Heavy equipment such as bulldozers make wonderful, compelling noises that sometimes even sound human in nature — snarling, growling, and roaring,” Manly says. “Giant-sized equipment gives a sense of powerful ‘otherworldliness’ — the basis of many fairy tales such as ‘Jack and the Beanstalk.’” But these giant items are also attainable. Manly says, “In a related way, children love that they can hold and ‘own’ mini-sized versions (toys) of these giant-sized entities. It gives the child a sense of control and personal power.”

As far as why it seems like more boys enjoy this kind of thing than girls do, traditionally, it has to do with cultural influences. “Even when parents are gender-neutral, the media often exposes children toward messages that generate a tendency toward traditional gender-specific toys (e.g., the media may show boys with cars and swords while girls are presented playing with dolls and watching fairytale princess movies). Girls, however, may often desire the ‘digger’ toys that are traditionally given to boys, particularly when parents provide a gender-neutral environment,” Manly explains.

Wondering why your son is way more into diggers than your daughter? It's not a big deal, really. Kids like what they like, according to Manly. “As to gender differences, some girls are naturally drawn toward dolls and such, while others are drawn to the magic of ‘diggers’ and such — and it’s the same with boys. Some are drawn to ‘rough and tumble’ playthings, whereas others are more interested in quiet, gentle play,” she explains. “Of course, socialization has a huge impact. Girls who are prodded toward dolls, stuffed animals, and books will be more likely to interact with those items as playthings, and those who are given an array of toys that include trucks and bulldozers may, indeed, prefer those items as toys. In the same way, young boys who are given and pressed to play with traditional ‘boy toys’ such as trucks and bulldozers will be more inclined to play with those items.”

Left to their own devices, no matter what gender, most kids love heavy equipment just because they’re big and loud, and the vehicles seem almost otherworldly to them. However, like most things, just because you have a boy doesn’t mean he’s going to love them even more, and just because you have a girl doesn’t mean she doesn’t love them as much as the next kid. Socialization, cultural influences, and the media shape our children’s likes and dislikes, and it’s up to us to introduce our children to as many different types of toys and experiences as we can. And to get just as excited as they are about a garbage truck rumbling through the neighborhood.