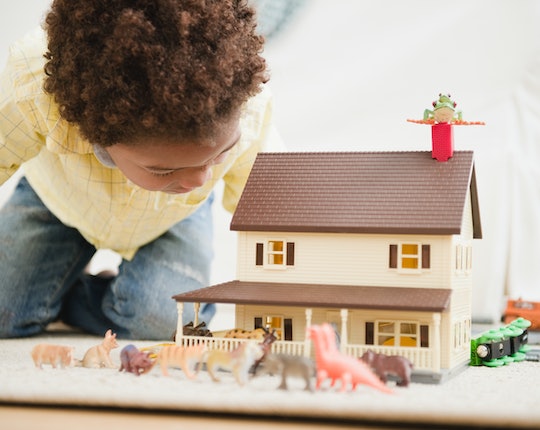 There is no denying the absolute cuteness of the teeny tiny food made for dollhouses and itty bitty toy helicopters with their minuscule propeller blades. And those little grocery carts made just for kids — who doesn't adore them? Kids (and us) love miniature things, but understanding the reason why seems as illusive as the act of actually snagging one of those tiny carts for your own kids when you get to the grocery story. (They're always already taken, I swear.)

Your kid's obsession with all things miniature is actually ingrained somewhere deep in their psyche, according to science. Humans are drawn to small, cute things because we are nurturers by nature. Research published in Ethology about the human caretaking instinct revealed that "baby schema" or features such as small size, round face, and big eyes encourages affection and caregiving.

Think about the perfect baby doll face. When you picture it in your mind, do you automatically feel all gushy and melty deep inside your soul? Probably so, right? I sure do. This same concept carries over into the love of miniature things. The tiny teacups that your child's Barbie dolls have teeny tea parties with have the same impact on the human brain, so people are innately drawn to them.

Seeing something in miniature form can also lead to more gentle actions when handling these items. Japanese researchers studied the impact of viewing images of "cute" things like puppies or babies (both of which are miniature versions of humans and dogs) and then performing tasks that required focus and fine motor skills. Their research revealed that subjects acted with more care when performing tasks after viewing the images than when they did not or when they viewed "less cute" images.

The brain signals of care and concern your child (and you) are receiving when seeing something in miniature form are what draws them in, but it might be the escape from reality that keeps them interested. When your child plays with a miniature thing such as a fairy land or dollhouse, they are transported into another world where they are in control. Famed psychologist Dr. Ruth told NPR in 2016 that she utilized dollhouses in therapy sessions with young children to help them express themselves. She said she had experienced the feeling of control it allows a child to have when she played with a dollhouse as a child herself as a refugee from Nazi Germany.

In addition to helping them feel in control of something and express their emotions when they play with miniature things, your child's love for all things miniature can actually be beneficial to their development.

"Tiny toys are my favorite therapeutic toy," Laura Blair, a physical therapist assistant with Therapy 2000 tells Romper. "I frequent the Dollar Tree and get a package of eight animals for one dollar. They make great quiet toys, but help develop so much finger dexterity, object manipulation, fine motor skills, and best of all, creativity — which so many kids are missing out on these days with so much use of electronics. They can also learn social skills such as sharing and interacting with others whether it be through their imagination or actually playing with others."

If your child is entertained by miniature things, Blair says that stocking up on these items to keep on hand during times when you want your child to play quietly, but also take time to interact with others (think at a nice restaurant or a wedding) can be beneficial. "The child is more willing to pause their imagination and talk with an adult possibly about what they’re playing or show their creativity," Blair tells Romper. "This also teaches them that sitting at dinner on electronics is not the best etiquette or way to spend family or social time. Allow them to learn social cues and conversation pieces as well. Their creativity will also soar."