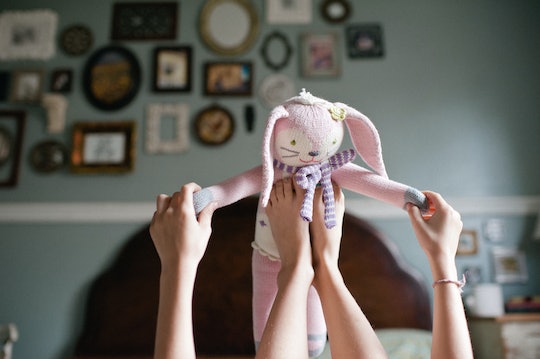 Why Do Kids Love Stuffed Animals? Experts Weigh In

Your child’s obsession with their lovey is no joke.

Picking up toy clutter in a home often means gathering scattered puzzle pieces and plastic toy kitchen accessories, but every parent also knows the work of flinging stuffed animals into baskets over and over. They seem to take over a home, but why do kids love stuffed animals so much? My own best friends when I was a child were my stuffed Snoopy and Woodstock. They went everywhere with me — including the bathtub sometimes. I'm definitely not the first or last child to become super attached to a lovey, but why?

Psychotherapist and children’s book author Beth Tyson tells Romper that kids love stuffed animals so much because they offer a sense of safety, predictability, and comfort in an often uncertain and frightening world. “Take a trip to any toy store with a young child, and you will most likely see them go straight for the pile of stuffed animals. My daughter, who is 4, will typically grab one and tote it around the store while looking at other toys,” Tyson says. “Just like adults, babies and children experience anxiety, and when they do, they look for people or objects that will provide support. Holding on tight to a soft cuddly object can soothe a child’s fears, especially when separated from a parent or caregiver.”

Katie Lear, a licensed mental health counselor and play and drama therapist, says stuffed toys are inherently soothing because it’s a “multi-sensory experience. You notice the button eyes and color of the fur, you feel the soft, fuzzy texture — many kids even talk about their most beloved toys having a specific smell that is comforting." (Which would explain why children aren't often tricked by having a worn-out stuffed animal replaced with a new one.)

Being soft is also critical, says Tyson. “One large study on attachment objects found that 31% of children prefer soft teddy bears, while only 7% of children choose hard toys made of plastic. The rest of the children in the study chose security blankets, rags, and cloths,” she says.

Additionally, for many kids, stuffed animals serve as a “transitional object,” says Lear. Renowned child psychologist Donald Winnicott studied children to learn why so many of them have a special attachment to a favorite lovey during early childhood, she says, and found that these transitional objects help children bridge the gap when a parent can't be there. The stuffed animal can remind them of their parent's love and care. “While any object can be selected by a child to be a transitional object, children most often choose a soft toy or fuzzy blanket for this task. The softness of the toy seems to be really important and helpful to them," Lear says.

And not only are children comforted by stuffed animals, but they’re learning important social-emotional skills while playing with them. Tyson says children are learning empathy, nurturing, and caretaking, to name a few. “They also practice language skills and imaginative play, which is crucial to healthy development."

This is why therapists often use stuffed animals to help kids reenact stressful or disturbing events so they can process their emotions. They're also used by professionals to model behavior and to talk about tough feelings and subjects a child wouldn't normally talk about, Tyson adds.

As far as any downsides to children loving stuffed animals, interestingly, back in the 1940s, research suggested that a child’s attachment to a toy or stuffed animal was due to a lack of attachment between mother and child, Tyson says. But the research by Winnicott discovered that the opposite is actually true. Kids attached to a stuffed animal or other object are more securely attached, happy, and content. The stuffy is viewed as a reminder of the love and attachment that the parent provides, not a replacement for a parent who is lacking, she says.

Lear adds that the only downside she can think of to a child loving a stuffed animal so much is that it can be extremely hard on a child to lose their transitional object. “If at all possible, buy your child's special toy in multiples, and keep a few on hand in case their main squeeze gets lost or has to take a trip through the laundry,” she says.