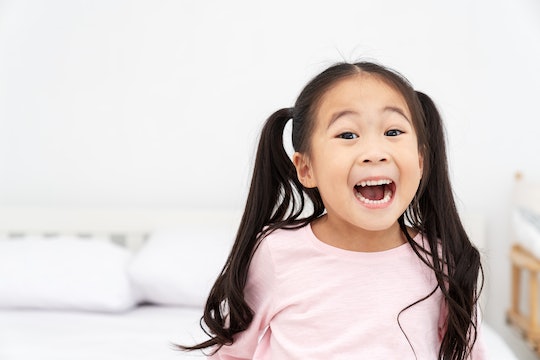 Guys, We Need To Talk About Why Kids Love Saying The Word "Poop"

As the mom of two boys, I can tell you that their obsession with the word poop started fairly young and hasn't eased up much into early elementary school. The popularity of the poop emoji doesn't help, and neither does the fact that other kids giggle when the word escapes from the lips of a classmate. If you find yourself in a similar situation and are wondering why your kid says poop all the time, you're not alone.

"Parents should not be concerned if their young child talks about poop frequently," Melissa O’Connell Liggett, Ph.D., developmental psychologist at Children’s National Health System tells Romper. "We often begin using the word with our infants and toddlers when we comment on their elimination habits as we’re changing a diaper or rushing them to the bathroom during toilet training. We frequently ask if they have gone or need to go. As children get older, there is a natural curiosity about the process which increases use of the word."

Kids will be kids, right? Potty humor is part of most every kid's vernacular at some point. After all, did you or did you not spread the word far and wide the first time your little one pooped on the potty? I sure did. When my youngest was struggling to potty train, we FaceTimed Grandma and Grandpa right after his first big boy bowel movement to celebrate the occasion. Poop was a big deal during potty training and it has only seemingly become a more humorous topic of conversation as my kids have gotten older. (All of the related novelty games, sparkly poop pillows, and other poop-themed items geared towards kids don't help.)

"Children often find it humorous that use of the word gets a reaction from the adult they are talking to. Often we crinkle our nose or make a face or comment — 'eeww!' — when our children use the word poop, which encourages them to continue using it, making it almost a game," Dr. O'Connell Liggett explains.

If potty talk is a problem, there are several approaches parents can take to help quell the barrage of poop-related giggles in a positive way. The first step is to set healthy boundaries around when and where potty talk takes place.

"We can encourage children to use the terminology when discussing their bowel habits and set limits for when use of the word is socially appropriate to use. For example, making it a discussion for the bathroom, but not allowing the discussion at the dinner table or in the classroom," Dr. O'Connell Liggett says.

Another important aspect of helping kids understand boundaries surrounding their obsession with saying the word poop is to be role models of how we expect them to use the word. Real talk: If I am always laughing hysterically at my kid's poop jokes or going overboard with my criticism of their overuse of the word, they're just going to be encouraged to do more of it. I need to check myself before I wind up making the issue a bigger deal than it actually is.

"Parents can model appropriate social behavior by being matter of fact in their discussion about toileting habits, not criticizing or reprimanding a child for their use of the word, and not overreacting to their children’s silly use of the word. Any parent will tell you that their own lives become somewhat dictated by asking about, monitoring, and cleaning up after their children’s poop at various stages of development," Dr. O'Connell Liggett says.

Everybody poops and everybody talks about it at some point, kids just happen to be less inhibited when it comes to making fun of potty practices and giggling over words like poop. Eventually, they'll take social cues a little better than they do now and learn when and where it is appropriate to make poop jokes. After all, they'll probably have kids someday and wind up hearing the same jokes they're making right now years later.