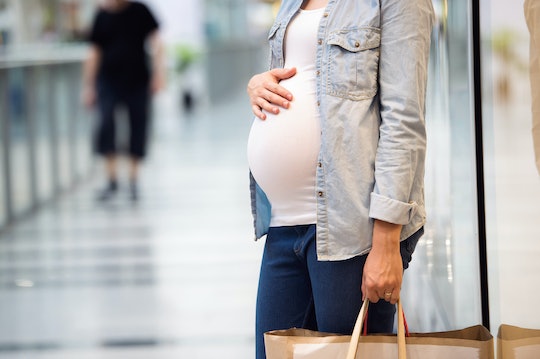 If Your Arms Feel Numb & Tingly During Pregnancy, Here's What You Should Know

Pregnancy does a lot of weird things to your body. You get hairier, your nails are wicked strong, and let's not even discuss what's happening to your vagina. But when it's a scary, strange feeling, like numbness, what do you do? If you're wondering, "Why do my arms go numb during pregnancy?" you're probably pretty worried about it and that's totally understandable. Numbness rarely seems like a normal feeling and during pregnancy, all of those fears are magnified.

Numbness is also one of those things that is really scary whether you're pregnant or not. Anyone who ever watched the HBO series Six Feet Under will remember when the character Nate had his stroke that began with him shaking out his numb arm. After that episode aired, I remember hearing that searches on Google for stroke symptoms spiked dramatically. Alternatively, anyone who's ever had tennis elbow or carpal tunnel knows the feeling of neuropathy all too well, and just the thought of numbness conjures forth images of slings and therapy and those freaking surgeries that hurt way more than you think they should.

Wanting an expert opinion on potential causes of peripheral neuropathy while pregnant, I spoke with obstetric nurse Natasha Billings of Brooklyn, New York to get the answers. I tend to be a bit of a worrier and a little bit of a hypochondriac, so I need someone to damper my alarmist tendencies.

Billings tells Romper, "Normally, it's nothing but nerve compression causing the numbness, but because numbness is a symptom of stroke, if you notice it, you do need to call your OB-GYN immediately. If it's accompanied by slurred speech, facial drooping, or if you're smelling a sulphuric odor like hair burning, call 911."

According to the University of Texas, strokes are responsible for 10 percent of all maternal deaths in the United States. While some women, particularly smokers, obese women, and women who have heart disease, are more likely to suffer stroke than others, strokes can also be idiopathic — occurring without warning or prelude. Apparently, I'm not so much an alarmist as I am cautious.

Billings went on to say, "If it's just plain old numbness, there are several possible causes. One is that you have a really big belly, and it's compressing your nerves, making them act out and go numb. This is the most common reason for pregnancy-related neuropathy." She notes that it's the same thing that happens when you fall asleep on your arm, or with it over your head. The nerves essentially go to sleep for a bit, and it's not uncommon for the feeling to return with a pins and needles sensation. While it's mostly no big deal, it still needs to be evaluated to assure you and your doctor that your limb is the only thing being affected by the nerve compression.

"It may also be pregnancy-related carpal tunnel, especially if you work in a field that you're using your wrists at strange angles frequently, like typing, cooking, or anywhere where you're liable to get a repetitive use injury. I've seen it in female firefighters who are housed because they can't go on calls, so they end up wrapping up the supplies for months. It happens." Boy howdy does it ever. My office mate had this happen to her last year, and she got to wear a lovely brace for months. She named it Earl.

Billings says your arm numbness might also be a type of brachial neuritis that flares with the hormones and body changes during pregnancy. This is much more rare, but it does occur.

Any numbness is cause for concern, and your provider will go through a series of questions with you, and may even refer you to a neurologist for imaging and further treatment. Likely, though, it's just another not so fun thing that can happen with pregnancy that you just have to wait out.