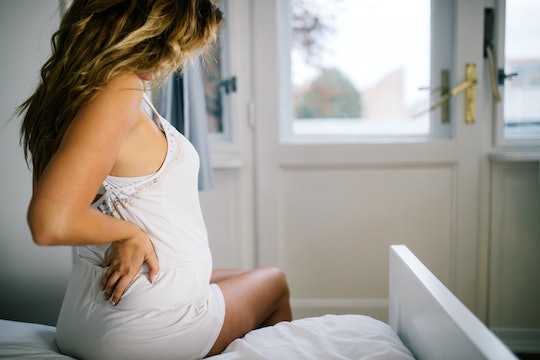 Here's The Deal With Your Nipples Changing Color In Early Pregnancy

During pregnancy, your breasts go through a lot of changes — they are preparing to feed your baby after all. Of course they get bigger... and if you were already a pretty busty gal to begin with, I am so sorry and totally feel your (back) pain. By using common sense, it’s pretty easy to understand why your breasts get larger and even perhaps why veins start to show up. But one thing that doesn’t seem to make sense, at least to me, is why do my nipples change color in early pregnancy? I know I’m not alone in this seemingly weird pregnancy symptom. And also, what’s up with those little bumps?

Dr. Jamil Abdur-Rahman, an OB-GYN and medical travel blogger along with his twin brother for TwinDoctorsTV, tells Romper, “Nipples change color during pregnancy because of an increased production by the pituitary gland of the hormone called melanocyte stimulating hormone (MSH). MSH causes skin cells called melanocytes to make more melanin, which is the protein that tans our skin. So basically, pregnancy causes ‘tanning’ of the nipples and frequently of the linea alba, that dark vertical line that runs down the center of the belly.”

Well that’s interesting, but what in the world does that have to do with breastfeeding? Absolutely nothing, according to Abdur-Rahman. Though I have heard that some schools of thought believe the darkened color helps babies find your nipple since they can't see very well after they're born. Mind. Blown.

So how dark can you expect your nipples to get, and is there a point when I should have my doctor check it out? “The degree to which the nipples darken during pregnancy varies greatly from person to person and from pregnancy to pregnancy. There is not a degree of darkening that would be considered troubling or an indication that medical attention should be sought,” Abdur-Rahman says.

As far as other breast-related symptoms that you should look out for, there's not a lot happening during pregnancy. But after delivery, it's a bit different, according to Abdur-Rahman. “That being said, the breasts of a pregnant women frequently do start producing milk even before a baby is born. If a duct that drains one of the milk glands gets blocked, the gland can start to fill with excessive amounts of milk. Unable to drain, the milk can collect in the gland and then become infected, leading to a breast infection called mastitis.”

Yikes. What are some other signs of mastitis other than it hurting like hell? “Signs of mastitis include the development of a painful, frequently enlarging breast lump that is accompanied by reddening of the skin around the lump and fever,” Abdur-Rahman explains. If this happens, seek medical attention immediately, “especially because infections of any type during pregnancy can cause preterm labor,” he says. “For example, many people are shocked to learn that one of the most common causes of preterm labor is periodontal disease and chronic oral infections.”

When exactly should you expect your breasts to begin leaking? Abdur-Rahman says it typically begins in the third trimester, or 28 weeks or later. For some women, it can happen as early as 12 to 14 weeks in pregnancy, and it should not cause alarm, he explains.

And those suddenly visible veins coming out all over your breasts? That has to do with blood flow, according to Abdur-Rahman. “The blood vessels running through the breasts pop out because they become enlarged during pregnancy, and after delivery during breast feeding. This is because the blood supply to the breasts and the glands of the breasts increase so that the breasts can make milk. Breast milk is nothing but a filtrate of the blood. So, more blood flow to the breasts as needed so the milk can be made from that filtered blood as it passes through the milk making glands.”

Aren’t our bodies absolutely incredible? Not only are we creating a human life in there, but our body knows exactly what to do to prepare to feed that tiny human, and then eventually actually feed them. Being a woman sure can suck sometimes, and having huge boobs can be a pain in the back, but our bodies are pretty special and awe-inspiring if you ask me, changing nipples and all.