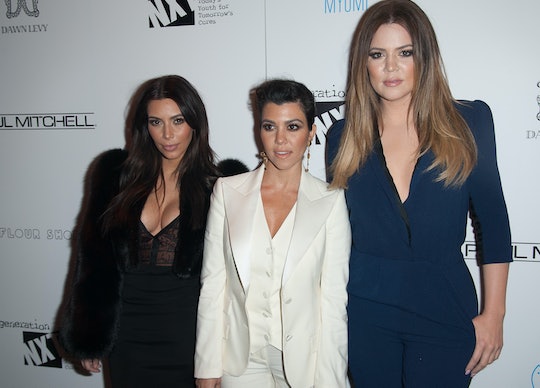 If you've been keeping up with all things Kardashian, then you may have heard that Khloé Kardashian plans to eat her placenta, like her sisters have done in the past, after she gives birth to her first child this spring. But, now, you may be wondering why the Kardashians eat their placentas in the first place and why they've all gotten behind this post-birth ritual.

Khloé Kardashian's due date is around the corner and while she has not yet revealed what she and NBA player Tristan Thompson will name their daughter, she has shared that she wants to eat her placenta after she gives birth... in pill form, like both of her sisters previously have done. Kourtney Kardashian has eaten her placenta from when she gave birth to her third child, as has Kim Kardashian with her second, Saint. Both sisters had their placentas encapsulated, which Khloé has also said she wants to do. "I'm going to eat it in pills," she said on a recent episode of Keeping Up With The Kardashians, according to Entertainment Tonight. No word yet on whether Kylie Jenner encapsulated her placenta after giving birth to baby Stormi last month.

But that still begs the big question: Why?

Let's delve into it. As The Atlantic reported, many in the medical field view the act of eating their placenta as a mere placebo effect. "Placentas contain remainder nutrients and hormones that were passed from mother to child in utero, but no clinical studies attest to their benefit (or harm)," the publication wrote back in 2013. But that doesn't mean that women don't feel benefits when they eat their placenta, in any form. The Atlantic also reported that placentas can be eaten raw, in pill form, frozen and blended into a smoothie, or even cooked into a specific recipe.

Nevertheless, despite the presence of actual medical evidence — and lots of anecdotal evidence that it relieves postpartum depression and boosts milk production — women and celebrities like Alicia Silverstone are convinced that they are reaping a mound of rewards. Silverstone previously told Kelly Ripa and Michael Strahan that the placenta pills really helped her postpartum. "I've got to the point that my husband said 'Did you have your happy pills today?'" she said, according to The New York Daily News. "And I was really sad when they were gone. It really helped me." Silverstone isn't alone in her thoughts on the pills, either. Both Kourtney and Kim explained why they decided to take placenta pills.

Back before Kourtney got pregnant with her third child, Reign, she said on an episode of Keeping Up With The Kardashians that she really wanted to try to eat her own placenta. "Why would you not take it? I want to have a third child just to eat the placenta," she said, according to the Daily Mail. Then she shared in an Instagram post (shown above) in 2015 that her placenta pills were "life-changing." She wrote, "Yummy...PLACENTA pills! No joke...I will be sad when my placenta pills run out. They are life changing! #benefits#lookitup."

Kim has explained a bit further about her reasoning for taking her placenta pill. On her website, according to Us Weekly, Kim explained:

I heard so many stories when I was pregnant with North of moms who never ate their placenta with their first baby and then had postpartum depression, but then when they took the pills with their second baby, they did not suffer from depression! So I thought, why not try it? What do I have to lose?

A lot of women who take placenta pills (or eat it in some other form) report feeling happier, healthier, and relieved postpartum depression. While it may indeed be a placebo effect, some women swear by. However, the Centers for Disease Control and Prevention has recently warned women that there are some health risks involved in eating your own placenta in dehydrated pill form, like transmitting certain infections to your baby if you're breastfeeding. So if you're considering following the Kardashians' lead, definitely do your research and talk to your doctor first.