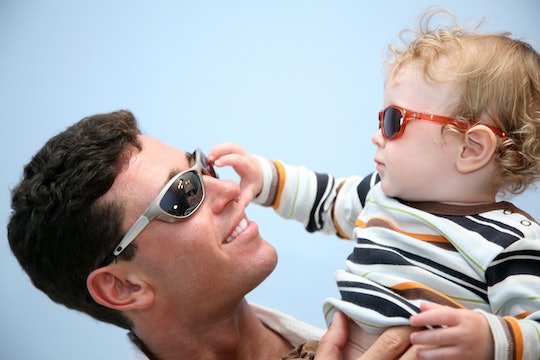 OK, The Reason Your Kid Loves Swiping Your Sunglasses Off Your Face Is Pretty Cute

My 13-month-old son’s favorite game in the world to play (other than throwing his sippy cup on the floor and watching Mom and Dad pick it up) is to grab Mom, Dad, Memaw, and Grandpa's glasses/sunglasses off of their faces. He then either immediately tosses them on the floor and watches them fall, or puts them in his mouth — along with everything else. Why do toddlers love yanking your sunglasses off? It’s like an obsession with my son. We can have one of his favorite toys in one hand, but if we are wearing our sunglasses, he zeroes in on them like he has tunnel vision and makes it his sole mission to make sure they are off of our face and on the floor.

The reason is pretty obvious and simple. Dr. Gina Posner, a board-certified pediatrician at MemorialCare Orange Coast Medical Center in Fountain Valley, California, tells Romper, "Kids love grabbing things in general, especially things that stick out like sunglasses, and they see you putting them on and off. They are also extremely amused and curious because they can frequently see themselves in the reflection." And that goes for glasses, too — except for the reflection part.

Dr. S. Daniel Ganjian, a pediatrician at Providence Saint John’s Health Center in Santa Monica, California, adds, "Toddlers are face-oriented, meaning they are fascinated by anything involving the face, such as facial hair, eyes, mouth, nose, ears, and jewelry — including earrings — and glasses. Children love to touch them because they are so accessible and movable. They can take things off and put them on — kind of like playing with a Mr. Potato Head."

So what if you can magically teach your kid to put them on their face instead of throwing them to the floor to shatter? Is it safe for toddlers to wear sunglasses? Will it affect their vision? Ganjian says, "Toddlers can wear sunglasses, but make sure you take them off when they are in places of low lighting — such as indoors — to prevent visual deficits. My experience is that most kids will not like wearing them for prolonged periods. Posner adds, that toddlers should wear sunglasses while in the sun "because the sun’s powerful rays can hurt their eyes, too."

And it's apparently even more important for a child with light-colored eyes, according to Posner. "The lighter eyes tend to be even more sun sensitive, so I definitely recommend to parents that they get their child a proper pair of sunglasses when they are outside." Plus don't kids look freaking too adorable for this world when they wear sunglasses? I can't.

As for getting your child to stop grabbing your sunglasses, glasses, hats, hair ties, necklaces, and other things off of you, it looks like you're stuck with it for a while, according to Posner. "You just have to tell them no. While this may not work immediately, it will help over time," she says. Ganjian adds, "You can teach toddlers — even young ones — but the younger they are, the more repetition and teaching you must do. When your toddler tries to touch your glasses, say no with a sad face and move your head back so your toddler cannot reach the glasses. Keep doing it, and after 10 to 20 times, they will usually understand. Some kids will require many more rounds, and other kids will need to be put down if they still do not listen."

Maybe if your kid has their own sunglasses they won't feel the need to pull yours off your face? Right. Who am I kidding? My kid wants whatever I have and he doesn't, including food on my plate when he is literally eating the same thing I am for every meal. But that's another article for another day, don't get me started how frustrating that is.

But as far as glasses and sunglasses go, kids just love to grab things. On the plus side at least, I guess this is working on their motor skills? Something like that. In the meantime, just keep telling them no, put them back on your face, and maybe, just maybe, they'll eventually get the hint.