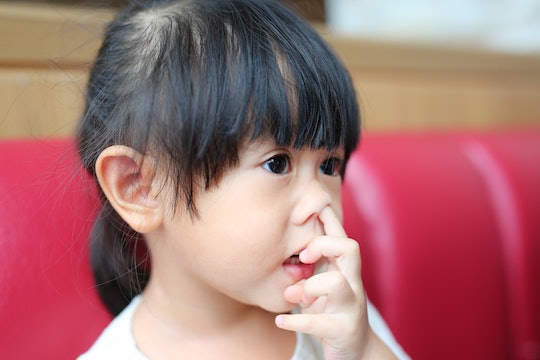 There's no denying it — nose picking is gross and yet, kids do it all the time. What is it about sticking your finger up your nose that kids just can't help but do it everywhere, in front of anyone, and give zero Fs. Is there an actual reason why toddlers pick their nose? Turns out, there is some science behind this gross habit, and there may even be some tips in here to help your kid kick the habit once and for all. (Or at the very least, get them to use a tissue.) I checked in with Maureen Healy, author of The Emotionally Healthy Child, and parenting coach at Growing Happy Kids to see why some kids just love digging for gold.

According to an article on Baby Center, kids can pick their nose for a variety of reasons. The most common is the most logical — it's just the feeling like there's just something up there. The most frequent pickers? Kids with allergies. So if your child is constantly digging for gold, you may want to get them tested for allergies. It could mean that they have a build-up of mucus that dries up, leaving them with dried mucus in their nose. Healy agrees and says, "Toddlers (and some older children) pick their nose because there is something uncomfortable there. Oftentimes children who frequently do this suffer from allergies and are sensitive to their environmental surroundings (for example, their room may be too dry at night)."

But could nose picking be a sign of something else? Like a nervous habit or something more compulsive? Healy says that kids pick their nose without realizing the negative societal implications; they just feel uncomfortable and want to remove the discomfort. "It's not more complicated than that unless they're doing it to taunt or tease someone — that's a different story," she says.

And what about that awful habit that comes along with nose picking? You know what I'm talking about — kids who eat it. This has always horrified me and I've never understood why kids do this because it is literally the most absolutely disgusting thing I've ever seen. When asked why kids eat their boogers, Healy says, "Some children naturally want to eat their boogers because they are salty or sugary. But scientists today are uncertain as to why toddlers (and older children) want to eat their boogers." However, she points out that there's some medical research indicating that eating boogers may be beneficial to your child's immune system. But still, gross.

So if you'd like to get your child to stop this unpleasant behavior, especially in public, Healy offers some advice. "You can encourage your child to stop doing it by explaining there are things you do in public and things you do in private. If you absolutely need to fix something in your nose, you can go to the bathroom (with your supervision, of course) and you can fix this situation. I would reward with praise my child who learns to do this — for his and others benefit." And don't forget about hygiene. Make sure your child washes their hands before and after they stick their fingers up their nose. Digging for gold with dirty hands can make a child sick, so make sure they wash their hands well with soap and water. In fact, an article on Live Strong explained some of the risks that can come along with picking your nose, and infections or number one.

So next time you see your little one going in, it's best to encourage them to use a tissue. It's just as important teach them positive social behavior as it is to help them learn how to protect their health. But if they seem intent on doing it, it's really OK. It's just one of those kid things.