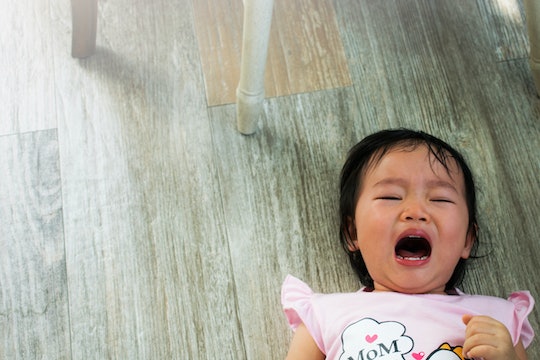 Here’s How To End & Prevent Toddler Tantrums, According To The Experts

Moms who are in the tantrum phase know all too well that the screaming, crying, perhaps-we-need-an-exorcism fits can be tough. But why do toddlers throw themselves on the floor when they get really worked up? Why is a full-body collapse the normal response to not getting their way? Well, it’s a pretty common thing, and it just comes down to feeling overwhelmed.

Kids' tantrums all over the world tend to share the same (terrifying) characteristics, according to a study by researchers at the University of Minnesota published in the journal Emotion. From whining and stomping when slightly inconvenienced, to hitting the deck or getting violent when super angry, kids around the globe tantrum the same way. It’s all about how the human brain develops.

“For toddlers, there is a stress response all human beings have that little ones have bigger because they don’t have a fully developed brain,” says Aliza Pressman, Ph.D, co-founder and director of the Mount Sinai Parenting Center in New York City, in an interview with Romper. “Their most evolved part of the brain is the part that goes right into fight, flight, or freeze. If they feel threatened — and a 'threat' can be not getting what they want or not liking a situation — until you develop the tools and brain capacity to manage those emotions, you’re going to end up throwing a tantrum.”

Stephanie Chapman, Ph.D, psychologist at Texas Children’s Health Plan The Center for Children, says that throwing themselves down during a tantrum may be a child’s way of getting their feelings noticed.

“From a behavioral and learning theories standpoint, children fall to the floor during tantrums because it has a function; often because it elicits sympathy or a response from the people around the child, like the child getting picked up and soothed,” she explains.

So, if your toddler gets overcome with emotion in a Target (or at home, but are tantrums ever that conveniently timed?), how can you get them up? Unfortunately, it just takes patience.

"There’s not much you can do during the tantrums. If we argue, rationalize, soothe, or cajole the child, often this attention will reinforce the tantrum and cause it to happen in the future,” says Chapman. What she recommends doing during body-flinging tantrums is to first stay calm. Then, if there is no immediate instruction that needs to be carried out, try to ignore the tantrum as best you can. Praise other children for staying calm so that they aren’t observing a tantrum and thinking it’s the thing to do. Remove the audience from the child so the stress in the room goes down. If it’s a crowded place, consider carrying the child to a calmer, quieter space in order to ignore the tantrum there.

Then, Chapman says, as soon as your child calms down, return with attention and praise. Let them know you are happy they self-calmed, and if they need reassurance, a hug, or help, give it to them then. If there is an instruction to be completed that triggers the tantrum, you can’t let the child cry it out or they might learn that tantrums help them avoid unwanted tasks. Calmly implement ignoring while also directing the child in a hand-over-hand way to complete the task (e.g., if he is tantruming that he doesn’t want to get in a car seat, calmly ignore the tantrum and carry him to the car seat). Again, eventually when the child calms down, offer praise.

“While this is about all you can do in the moment to weather the storm of a tantrum, a lot can be done to prevent tantrums in the future using simple strategies,” she explains. “To help get rid of tantrums over time, parents can also consider praising or giving attention more to kids when they are doing the opposite of tantruming. Catch kids being good, staying calm, working through a problem, and praise them for their efforts." Another strategy she recommends is to try and prevent the tantrum by being aware of their timing. "For example, if a child is always hungry at 4:30 p.m. when meltdowns start, feed her earlier. If a child always tantrums when it’s time to turn off the TV and get dressed, change up the routine to have the sequence of get dressed, then TV," she says.

Pressman says while these things aren’t always easy, they matter. It’s important to help your child learn to regulate their emotions at this age because it will affect them later in life.

“We know from studies that parents who help children get back to a place of regulation and calm when they’re experiencing that level of distress, it’s predictive of later self-regulation," she says. "You’re kind of co-regulating now in the service of helping them self-regulate later."

If you’re looking for more resources on managing tantrums, Chapman recommends three books: Parenting the Strong-Willed Child, SOS! Help for Parents, and 1-2-3 Magic: Effective Discipline for Children 2-12. Pressman adds that some amount of fit-pitching is developmentally normal and not anything to worry about.

“It’s normal to the process of growing up,” she says. “If you notice these tantrums seem out of the ordinary, or if they’re lasting beyond 5 years of age, something else may be going on. If you’re talking about a couple tantrums a week and that gets better over time, this is normal. If you’re talking about many tantrums per day, that can be worth mentioning to your healthcare provider. It’s not always that there’s something wrong ... but you may need some parenting support to ensure the response to these tantrums is helping the child develop."

Stephanie Chapman, Ph.D, psychologist at Texas Children’s Health Plan The Center for Children and Women and assistant professor at Baylor College of Medicine