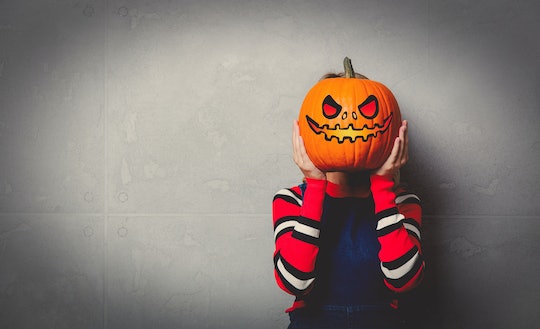 Soon, kids (and grownups) all over the country will dress up in their favorite costume and go door-to-door offering the phrase in unison, "Trick or treat." If you think about it, it's kind of a bizarre ritual, right? I mean, as a kid we're always told never to take candy from strangers but on Halloween it's OK? And what about the costumes? It's the only day of the year where it's socially acceptable to leave your house looking like, well, anything other than your normal self. So why do we do it? Why do we celebrate Halloween? The answer might surprise you.

For some people, Halloween is just another day, but for others — myself included — it's a day of pure fun. I mean, candy, costumes, make-up, games, spooky things, how can you not love Halloween? I put my history nerd hat on and did some serious research into the ancient tradition of Halloween and how it came to be what we know now. And let me tell you, the story of Halloween does not disappoint. Karen asks Caty a very good question in the classic 2004 film Mean Girls when she wonders, "Why are you dressed so scary?"

There's a reason why we associate Halloween with all things spooky. This ancient 3,000-year-old tradition began with a group called the Celts, which were a warrior tribe that settled in the northern British Isles and France, according to the History Channel documentary, The Real Story of Halloween — definitely worth the watch for all you Halloween fans out there. The tradition began as a celebration of the fall harvest, which meant the end of summer and beginning of the dark season — also known as winter. According to an article on history.com, the Celts called this holiday Samhain (pronounced sow-in) and believed during this time the barrier between the world of the living and the spirit world was unusually thin, making it possible for the dead to walk the earth. Spooky, right?

Afraid that the spirits would cause mischief, people began to leave offerings outside their door to appease the spirits. According to The Real Story of Halloween, people began to travel door to door and offer to pray for that family's dead loved ones in exchange for small treats such as cakes. Sounds a lot like trick or treating doesn't it? A video on History.com noted that the Pagan religion believes that fairies would roam the earth on Samhain and cause mischief and pranks just as spirits would. OK, who else wants to dress up as a fairy for Halloween now? 'Cause I do.

This ancient Celtic tradition of Samhain was believed to be the best night for telling fortunes. In the documentary The Real Story of Halloween, Druids (Pagan priests) would predict prophesies by reading tea leaves. It is believed that this is the beginning of the tradition of telling ghost stories, as the prophesies would make their way through villages.

Meanwhile in ancient Rome, Pomona — the goddess of gardens and fruits — was a celebration that took place on Nov. 1. According to The Real Story of Halloween, offerings of nuts and fruits were made as a thank you for their harvest during this festival, along with some other traditions such as apple bobbing. As Rome began conquering northern Europe, the traditions of Samhain and Pomona began to blend, according to the documentary. So, thanks to the Celts and the Romans, we now have trick-or-treating, apple bobbing, mischief, spooky dead things, and fairy costumes. But what about witches and all that devil worship stuff? This is the best part.

While Samhain and Ponoma were traditions born long before Christianity, according to The Real Story of Halloween, the church began conquering Europe and Pagan holidays such as Samhain became "the work of the devil". As the documentary explained, Pagans worshiped nature and "natural spirits," making them anti-Christian according to the newly emerging Christian church, and in an effort to drown out the Celtic holiday of Samhain, the church created All Saints Day or All Hallows Day on Nov. 1, making Oct. 31 All Hallows Eve, or Halloween. As the church intensified their efforts to get rid of Samhain, Pagan women who were considered "unruly feminine powers" and were labeled as "satan's handmaids" that were hellbent (no pun intended) on "evil and destruction," thus witches were born.

But how did all of this come to America? According to History.com, in the 18th century a potato famine drove Irish immigrants over to the American colonies, bringing the survived Celtic traditions along with it. However, some of the traditions had to be changed. For example, instead of bonfires, people began carving gourds and lighting a candle inside instead, making what we know as jack-o-lanterns. Pretty interesting stuff right?

Halloween has been with us long before it became the Halloween we all know and celebrate today. While Samhain may still be celebrated by some surviving Pagans (if you've ever seen the show Outlander, then you already know the magic of Samhain and fairy hills), it is so interesting and fun to learn about the history and lore of our more contemporary holidays. Happy trick-or-treating!