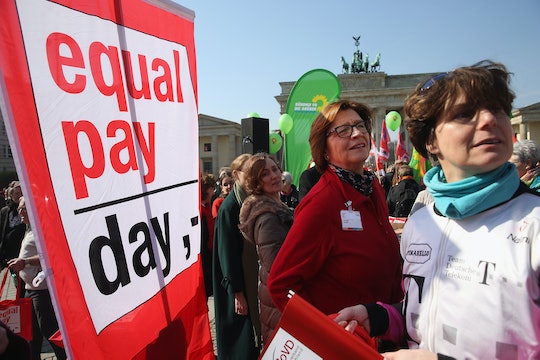 Why Do We Have An Equal Pay Day? It's No Cause For Celebration

It's Equal Pay Day, and, for those who haven't heard of it before, it might be a bit confusing. Have we suddenly achieved equal pay? Did it finally happen? Are we celebrating (and, um, should I be breaking out the champagne on a Tuesday morning)? Unfortunately, no — women are still being paid less than men, and the wage gap is still very real. So why do we have an Equal Pay Day?

Think of it as a powerful reminder that we have a long way to go in closing the wage gap. In the United States in 2014, on average, women were paid 79 cents to every dollar a man earned. With those stats, it would take women from Jan. 1, 2015 until April 12, 2016 to earn the equivalent of what their male counterparts earned in 2015 alone. Suddenly, that small difference of a few cents seems like a pretty big deal.

Why does this wage gap exist? There are several reasons. Many will tell you that the wage gap is the stuff of fantasy. Some will say men dominate higher-paid occupations, have more education, or that women leave the workplace to have children (and thus it's their fault they are paid less). They might even suggest that men ask for more or just work harder. If you dig into that 21 percent difference in wages, however, many of the explanations for the wage gap disintegrate.

Women now have the educational advantage on men: they have higher average levels of education, and they tend to pursue more advanced degrees than their male counterparts, according to a study in the Journal of Economic Perspectives — so the education argument falls short. Nor does it seem to be making the situation better: as women take on advanced degrees, the wage gap actually grows, according to CNN.

That said, while women now earn 60 percent of bachelor degrees, only 20 percent of them are in science, technology, engineering, and math (STEM) fields. And there's no escaping it: there's cash to be found in those fields. Admittedly, about 51 percent of the wage gap can be explained by differences in occupations and industries, according to The Chicago Tribune.

But the wage gap persists even in those different occupations: according to Business Insider, many women in science are paid less than men in the same roles, given less office and lab space, and receive less resources for their work. An American Institute of Physics study found similar results in nearly all cultures, even after controlling for extraneous variables outside of gender. Female software developers earn 80 percent of what male software developers do. (Let's not forget that cultural gender norms also play into the professions men and women seek out.) And, occupation isn't a good excuse for the pay gap. Researchers at Cornell University found that, as occupations become more female-dominated. For example, janitors, who are usually men, earn 22 percent more than housemaids, who are usually women, according to the New York Times. The discrepancy can be attributed mostly to gender inequality: people just don't value the work women do.

So maybe men are just have more experience — and, after all, experience tends to warrant higher wages. But the wage gap actually increases the higher you go on the corporate ladder, with one of the largest pay gaps at the executive level, according to PayScale. Having children doesn't explain it either, as becoming a parent also leads to some of the largest differences in wages (i.e., women tend to get penalized salary-wise for having children, while men's wages actually get a bump once they become fathers).

And, as for the whole, "If you want more money, ask for it" ideology? While it's good advice in theory, NPR reported that both male and female managers are less likely to want to work with women who negotiate their salary during a job interview. According to the Harvard Business Review, women suffer a significant social cost when they negotiate their salaries — a cost that disappears for men.

So how do we combat this? Fight for equal paid parental leave for mothers and fathers, advocate for laws that ensure equal wages (such as the Paycheck Fairness Act), be careful of the stereotypes you instill in children, and keep negotiating for your fair salary — because the more women do it, the more normal it'll become. Because it's time for April 12 to become just another day, rather than a reminder of inequality.