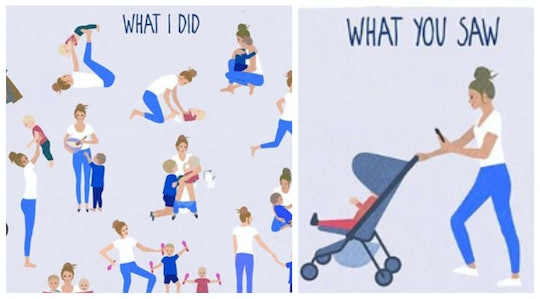 Why Does A Mom Using Instagram Make Us So Angry?

I love that I can relax at the playground while my 5-year-old daughter "Supermans" in the swing, and fills her galoshes half with wood chips, but the anxiety that creeps in the moment I think about pulling my phone out to scroll Twitter — bad mom! put away your phone! — is enough to keep me from doing it. And thanks to the latest cartoon from Australian comic Michael Leunig shaming mothers who dare use Instagram while parenting their kids, I can see why I feel that way.

The cartoon, published in Australia's The Age, depicts a mother — in snazzy green pants — pushing a stroller and staring at her phone, while her baby lies on the ground behind her. The caption reads:

Mummy was busy on Instagram / When beautiful bubby fell out of the pram / And lay on the path unseen and alone / Wishing that he was loved like a phone.

It is... not funny. And that's a popular opinion. After the piece gained some traction in Australia, responses started pouring in — including one from Leunig's own sister. But the loudest responses are from moms — and moms on Instagram at that. You know, probably ignoring their kids and letting them sit in rotting diapers so they can craft the perfect post.

This is an old riff from, let's face it, a much-older generation (Leunig is 74). Years ago, a photo went viral of a woman at an airport, scrolling through her phone, as her baby played on a blanket on the floor. I've seen it several times through my own Facebook feed, followed by comments like, "This is what's wrong with our generation" and "so much for a loving and caring mother." The general consensus was that this woman — who did not give any stranger permission to take her and her baby's photo, by the way — was a terrible mother for looking at her phone instead of babbling away at her infant. Suffice it to say, when the real story came out — the two had been through Delta's computer shutdown and spent 20 hours in airports, Today reported — there was a lot of crow to eat.

Nobody sees the work mothers do behind the scenes. The woman who sees you snap at your kid in the grocery store doesn't see the puzzle you both put together that morning, or the cookies you baked together

Society tells moms to take a break, to ask for help. The world is inundated with "motherhood is hard" rally cries. Hospitals send home pamphlets and fliers and sometimes videos reminding you that, while a baby screaming for hours on end is frustrating, you should never shake them. Don't shake the baby! the nurse will say as you grab your "It's a Girl!" balloons and flowers to head home. Don't ever, ever shake your baby. Find a safe place to put them and walk away. Call for help. Ask someone to help.

But, you know, don't ever look at your phone while your baby's around. And don't place them on the floor when you could hold them instead. Don't let them cry in their cribs — they're crying because they need you! You're their mom! — and don't check your phone at the park instead of circling them at the monkey bars like Michael Myers. It is not enough to nurture them through days and nights, years on end, if a stranger sees you lapse from active child-directed parenting.

Nobody sees the work mothers do behind the scenes. The woman who sees you snap at your kid in the grocery store doesn't see the puzzle you both put together that morning, or the cookies you baked together, or the game of hide-and-go-seek that lasted for nearly an hour in the backyard. The teacher who sees you pick up your kid while still on a phone call from work doesn't see that you'll hang up as soon as you get home, that you'll take your little one to their swim classes and get frozen yogurt after and maybe stop by the library. And Michael Leunig, as artist Paula Kuka beautifully showed in her cartoon response, doesn't see all the things a mother does for her child in that brief second of seeing her on her phone during a walk.

My husband gets an hour-long lunch break in the middle of his day. Do you know what he does? He eats lunch and listens to his favorite sports podcast, and sometimes he takes a nap to finish it off.

I work from home, and I have since my oldest was just a baby. It's not easy, and it's not always a perfect set-up, but neither are the parents who work while their child is in day care, or the parents who stay home with their kids and don't work. Yet every time I see someone ask for help on how to balance it all — someone asking about jobs they can do from home while they care for their kids or someone asking if they could take their child to work with them — the judgment rains down. "You won't be a good worker and you won't be a good mother," is my favorite response. It's as if there's no way we can imagine a mother doing both. That if she's not typing on her computer until her fingers bleed, never pausing for a moment, and if she's not staring at her child in wonderment and awe, fulfilling their toddler's every wish, she is both a sh*t employee and a sh*t mother.

My husband gets an hour-long lunch break in the middle of his day. Do you know what he does? He eats lunch and listens to his favorite sports podcast, and sometimes he takes a nap to finish it off. During the day, he takes small breaks to browse Twitter, to step outside for some air, to call our daughter to see how kindergarten went.

When he has our girls on his own, he watches football in between games of Candyland. He gives our 5-year-old her tablet so he can rest on the couch. He blocks off the doorways so our 1-year-old can explore and he can look at his phone.

Never does he feel any guilt for this. He shouldn't! Yet mothers aren't allowed to multitask, to listen to a podcast during a walk, to let the baby smash plastic cups together while they look at Instagram. How could we ever find something other than our children interesting? How dare we spend two minutes doing anything for ourselves?

Leunig doesn't know all of the work a mother does. He, like so many other people in the world, take a brief three-second moment of someone's day and find it right to judge. It's why moms are terrified to leave their children in the backyard alone so they can run inside to pee. It's why I keep my phone firmly in my pocket at the playground, lest I become an internet meme of a mother who doesn't care about her child. It's why I smile and push through the grocery store, even while my children scream, because unraveling in front of a Publix employee who didn't see all of the v. good sitcom-level mothering I did that morning isn't an option.

And it's why some of us look at Instagram once in a while on our walks. Sometimes, we need to know we're not alone. And damn, sometimes we're trying to post the perfect happy photo of our kid enjoying the outdoors with Mommy.