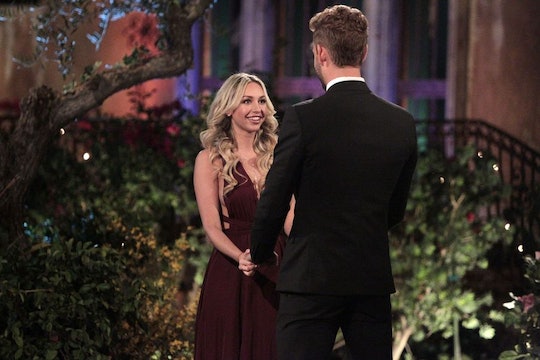 This 'Bachelor' Contestant Still Has A Nanny

The thing about Corinne on The Bachelor that stands out the most — other than the fact that she looks like a real-life Bratz doll (which is a definite compliment in my book) — is the fact that she clearly comes from money. I'm talking she is so rich that she still has a nanny assisting her with day-to-day needs, which is something I've never really seen before. So why does The Bachelor's Corinne have a nanny? This contestant is 24 years old, but is also said to be running her family's "multi-million dollar company," as she says on the show, so maybe her nanny is the closest thing she has to a personal assistant.

When Corinne's introduction video was being shown and she suddenly referred to a sweet, quiet woman named Raquel as her nanny, I assumed that this would be the Bachelor contestant this season who had kids. But no — instead, Corinne's nanny is just for her, because apparently running a company means you can't cut your own cucumbers? I totally get that Corinne is probably super busy, working for her family's business and also modeling on the side, but for a 24-year-old to still have a nanny, it raises lots of questions. Mainly, why does Corinne have a nanny at all? And at what point will the Bachelor contestant decide that she no longer needs one?

If Corinne requires the help of her nanny and really does take her everywhere she goes, like she said on The Bachelor, then will Raquel also fly in if she makes it to the final two and be on-hand if Nick proposes? This is a serious question, because truly, the idea of a nanny for a grown up woman is so new to me. There are nannies, or caregivers, for the elderly, or those who physically require more help than others, but clearly Corinne's biggest issue is that she's a multi-tasking, multi-millionaire, so is a nanny really necessary?

At 24, Corinne is still young, but hardly young enough to warrant the daily help of an actual nanny. So maybe — hopefully — Raquel is a family helper who has been with them so long that "Nanny" is an endearing term and that she isn't actually on-hand to cut Corinne's food when she's ready to eat. Although Corinne is plenty present on social media, her Instagram life is that of the typical 20-something, with rare sightings of family members, much less household staff.

So the answer is one of two things: Corinne's nanny is actually an assistant, but is referred to as her nanny due to how close they are. Or, Corinne legitimately still utilizes the nanny she had growing up. Either way, I am insanely anxious to see if Raquel gets to be there for hometown visits, should Corinne get that far, and what she might have to say that doesn't involve preparing Corinne's snacks.