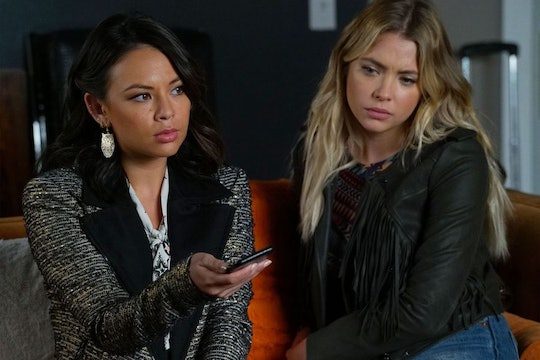 Mona Might Be Looking For Answers On 'Pretty Little Liars'

In the latter half of Pretty Little Liars Season 7, A.D. has been forcing the girls to play their game literally in the form of a board game called Liar's Lament. The girls have had to obey A.D.'s orders or face the consequences of having their dark secrets revealed to everyone; the darkest of all is their involvement in Archer Dunhill's death. But while the game hung over all the Liars like a storm cloud, Mona found it totally fascinating. She was dedicated to figuring out how it worked and was even shown pouring over it at the end of "Choose or Lose" in the privacy of her apartment. But there was one small catch – the game had presumably been taken back by A.D., so why does Mona have the board game on Pretty Little Liars?

The game had been making the rounds to each and every single Liar, depending on whose turn it was, but the physical board was only seen twice in "Choose or Lose." The first time it had been mysteriously deposited in Emily and Alison's bed and then quickly snatched back before the police could find it, probably by A.D. or one of their minions. Then it showed up again at Mona's place with no explanation. But the show has tried to use Mona as an A.D. red herring before (just during last Tuesday's episode, in fact), so all might not be quite as it seems.

The final moments of "Driving Miss Crazy" implied that Mona either was A.D. or was working with them, but that was quickly cleared up in "Choose or Lose" when she revealed that she was only trying to deduce A.D.'s identity. The same thing could be going on with Mona and the game. Perhaps she only stole it (with oddly perfect timing and undetectable breaking and entering skills) so that she could get to the bottom of how it worked in her own time. That was something Mona had been trying to do since she first learned about the game, after all.

Then again, Mona could be operating on multiple levels here. Coming clean about investigating A.D. could have been a fake-out within a fake-out: the best cover for claiming she wasn't A.D. could have been owning up to her sneaking around and throwing the blame onto Aria. It made it seem like Mona was innocent and that presumed innocence could keep her real machinations secret for a little while longer. Mona might be behind everything after all.

Mona's motives are currently pretty mysterious, but there could be some kind of symmetry in her being the first A and the last one. However, if she isn't, then she's clearly determined to get to the bottom of Liar's Lament no matter the cost. And if anyone could do it, Mona could.