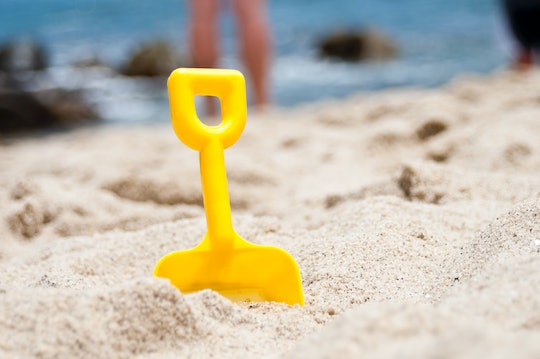 Why Your Baby Hates Sand, According To Science

Summer is here, which means parents are pulling out the sunscreen, pool floats, and sand buckets. The beach isn't exactly a relaxing vacation when you have a baby, but it's especially difficult to enjoy if your kid screams every time they come near the sand. If you're wondering, "why does my baby hate sand?" you're not alone. Literally millions of people wonder this every summer as they lay down towels for their picky, fussy babies. But what's the big deal? Why do babies hate sand so much?

It's easy to slip into a fear that your baby has some kind of sensory processing disorder, making them hate the feel and texture of sand, but honestly — it's usually not that serious. While it's really frustrating to deal with a screaming baby at the beach, it's normal. According to Board-Certified Pediatrician Jasmine Zapata, most children grow out of this fear. "This phenomenon with babies and sand occurs due to them being exposed to a new texture they have never experienced before for the first time," she tells Romper. "This is very common. A similar phenomenon is how babies react to new textures of new foods that parents introduced in the first year of life. Often they spit it out or dislike it because it's a texture they never tasted before. This reaction is similar to the sensation of sand on their feet."

Makes sense, right? You've literally been walking (or not walking) on ground that you can recognize — carpet, tiles, hardwood floors — and now someone's basically forced you to sit in something that feels like sugar. For a baby, it could be really confusing and babies know only one surefire way to communicate their emotions — they lose their minds.

Zapata notes that this hatred of sand is similar to how babies react when they touch grass for the first time with their bare feet. She adds, however, that if the fear of sand seems to stick around or it's accompanied by the fear of other textures and spaces, you should pay attention. "Most children grow out of this, however there are some children who have long-term problems with texture hypersensitivities," Zapata says. "If this problem persists for more than the first several months, parents should talk to their pediatricians about connecting their child with a therapist that can help with this issue."

Overall, Zapata says this is really common because it's the first time your baby's been exposed to the texture of sand and it frightens them. (Rightfully so, sand literally gets everywhere.) The best thing you can do is remain calm and give them some comforts where they need them, whether it's a towel for them to sit on or water shoes so they don't have to feel the sand on the bottom of their feet. Don't let their freak out ruin your vacation — it probably won't last forever and there are plenty of ways you can enjoy the sun and water without listening to them scream. Pack some sunscreen and spend some time in the water if the sand is too much for them. You won't miss cleaning all of the sand out of their sweet baby crevices anyway.