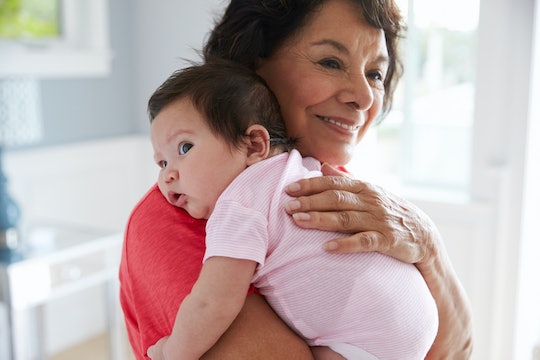 Here's Why Your Baby Seems To Prefer Their Grandparents Over You

Grandparents are awesome. They’re basically built-in babysitters for some families, and always there for guidance and advice (even if you don’t ask for it). It’s no secret that most grandparents love to spoil their grandchildren — they get to give them back at the end of the day, after all. But when you pick up your kids from their grandparents' house and they start screaming when you try to take them home, some parents may be wondering, "Why does my baby like their grandparents more than me?"

Dr. Wyatt Fisher, a licensed clinical psychologist in Denver, says there are usually two reasons a child prefers the grandparent over the parent.

"First, it may be because the child spends much more time with the grandparent," he says to Romper in an email. "This occurs often when a working parent leaves their child with the grandparent during the day. Children tend to bond with those they spend the most time with."

Relationship coach Brian Taylor, and author of The Marriage You Never Dreamed of – Practical Steps to Extraordinary, Lasting Love, says, "Everyone likes to be valued and treated as important."

In an email to Romper, Taylor explains that this is the way most grandparents typically treat their grandchildren. "Parents also value their children, of course, but the task of parenting includes instructions, regulations, teaching them how to do things, structure (it’s bedtime) and discipline," he says. "When grandparents teach and train, they tend to do it more gently and show an example. They are typically more patient as they do not have the pressures of time, including having to get to work."

So how can you become the most-loved adult in your kid's life again? Taylor’s recommendation seems pretty simple. "Many parents could improve raising their children by communicating that their children are of immense value to them," he says.

It may seem like common sense and it’s obvious, but according to Positively Positive, there are specific ways you can show your children they are valuable to you. Praising them often and telling them you love them, really actively listening to them, being there mentally and physically for your child when you have family time (no cell phones), creating family traditions, and encouraging your kids’ dreams are a few ways to show how much you value them.

Of course, nobody is saying you should spoil your kids rotten or that they have to be the center of your universe. Nor do you have to be their best friend. Just be mindful of your actions and how you’re spending time with your kids. Is it quality time? Do they really know how much you appreciate them?

And remember, grandparents love to spoil their grandchildren because they’ve already raised you, and they can have all the fun of having kids again — but this time they can give them back when they’re done. Don't take it too personally and don't hold a grudge against your baby's grandparents. After all, anybody who loves your baby that much is worth it, right?

More Like This
The 16 Best Subscription Boxes For Every Kind Of Kid
What Exactly Is The Ferber Method? The Sleep Training Approach, Explained
When It’s Safe To Bring Your Newborn To A Restaurant, According To A Pediatrician
Can You Burp A Baby Too Hard? A Pediatrician Shares Tips For Gassy Tummies