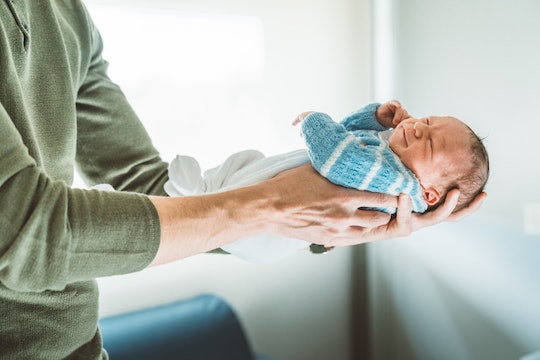 Experts Say Your Baby's Not Twitching Because Of A Bad Dream —It's Nerves!

Parents go into full-blown research mode when babies make any unexplained movement. "Hey, Alexa. Why does my baby twitch?" Thankfully, this one can definitely be explained, and we have the answers directly from the experts.

"Newborns have very twitchy nervous systems," Dr. David L. Hill, M.D., a pediatrician with Goldsboro Pediatrics and adjunct professor of pediatrics at the University of North Carolina, tells Romper. Hill explains that the insulation around a baby's nerve fibers, called myelin, is still developing. Compared to older children or adults, babies have very little of this insulation, he says. Without full insulation around their nerves, signals to the nerves more easily cause reactions.

Have ever noticed your baby's tiny jaw quivering even though they otherwise seem warm enough? This is a type of twitching Hill attributes to normal nervous system development in babies. He also notes that parents may see their babies experience a type of twitch called the Moro reflex. Pediatric epileptologist and child neurologist at Children’s National Hospital, Dr. Archana Pasupuleti, M.D., tells Romper that this is often referred to as the startle reflex.

"This usually occurs as a response to loud sounds or unexpected change in position of the baby," Pasupuleti says. "Often, the baby can arch their back, cry, extend out arms and legs, then pull their arms and legs back in. There may also be shaking of the limbs." Babies usually have this reflex from 2 to 6 months of age, she adds.

Hill says many parents also notice their babies hiccuping or sneezing due to their still-developing nervous system. When new parents ask him about this phenomenon, he asks if they experienced the feeling of their baby hiccuping in the womb. Parents usually say "yes."

"It’s a reminder that things haven’t changed just because they got born, and it’s going to take a while for that to calm down," Dr. Hill says.

Parents might notice twitching in babies is during sleep. My babies did a weird jumping thing during their sleep that scared me half to death, but according to Dr. Peggy Lazerow, M.D., the division chief of pediatric neurology at the Children's Hospital at Sinai, this is completely normal behavior. "Twitching in sleep or during transitions between waking and sleep is very common and are usually not a cause for concern," she tells Romper.

Although most of your baby's twitching can be attributed to normal development, there are times where it can signal more serious issues such as seizure activity or opioid withdrawal. Hill says that any pregnant mom who has taken opioid pain medication or is in therapy for opioid abuse disorder should notify their obstetrician so their baby may be treated and monitored for withdrawal symptoms.

"The other thing that we get concerned about is seizure activity," Hill says, explaining that twitching with seizures tends to be repetitive, is often on one side of the baby's body, and is caused by conditions including meningitis, tumor, or undetected stroke. "You may see arching behavior or the eyes being driven up or down or to the side," he says. "That would not be the normal twitching that we expect in newborns, so if you see movements like that, you definitely want to alert your baby’s doctor."

Pasupuleti often asks parents to video any abnormal twitching for a physician to review. "As a pediatric neurologist and epilepsy specialist, I often tell my families to look at what triggers these movements," she says. If these movements cannot be stopped by re-positioning baby, they could signal something more serious.

Additionally, Lazerow tells Romper that if a baby loses some developmental skills, bring this up to your pediatrician right away. As with anything concerning your baby, if you have questions, it's best to contact your child's doctor. "Parents should never hesitate to bring up questions about a baby's movements to the doctor, even if it is usually benign," Lazerow says.