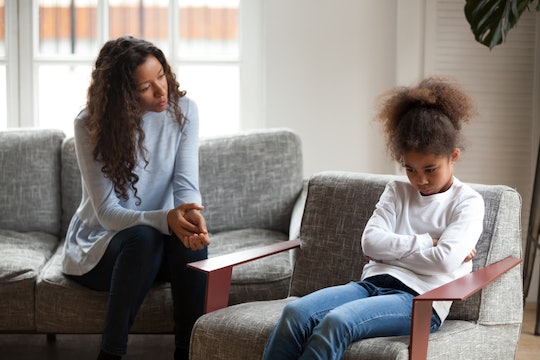 It's no secret that your kids are best behaved with literally anyone else other than you. As a mom, you're used to it and probably just chalk it up to being part of the job, right? Wrong. While it's true kids misbehave the most when their moms are around, it doesn't have to be that way. So, if you're asking yourself, "why does my child behave for everyone but me," here's why, according to experts.

First things first — this behavior is completely normal. It's not awesome, but at least you're not even close to being the only mom experiencing problem behaviors while literally everyone else gets an angel child. I checked in with Licensed Clinical Psychologist, founder and director of Innerbalance Psychology Center with locations in New Jersey and Philadelphia Dr. Dawn M. Raffa, as well as Psychotherapist and Life Coach,Ana Jovanovic of The Parenting Pod, to see if they could help out some moms in need.

Kids misbehaving the most for their moms is a real thing. According to an article from Popsugar, plenty of moms know that their kids are worse when their mothers are in the room, and it's a wonder moms everywhere aren't having a breakdown every day. (Spoiler alert: It's because they're tough as nails). But Dr. Raffa says that the reason why moms get stuck with behaviors that test their limits is because "mothers are typically the primary caretaker and attachment figure in a child's life. Children feel more comfortable expressing all of their feelings and behaviors with their mother because of a mother's unconditional love for their children." Well, ain't that the truth. Kids know that mom will be there no matter what (and you wouldn't have it any other way), so it's a safe place to test the boundaries. Jovanovic agrees and says, "Moms see a much broader range of their child’s behaviors than others do," since moms are with their kids most of the time and that's not something that is likely to change anytime soon.

So what can you do about this troublesome behavior, and does it mean it's a sign of *gasp* bad parenting? "It does not necessarily mean that something is wrong with either parent or child," Dr. Raffa says. "[But] it does indicate that something has to change with their relationship and with discipline." Jovanovic adds to this and says that sometimes moms can be too permissive. "Just like setting boundaries provokes frustration, not having any or having some can lead to total chaos," she explains. Moms should practice consistency and create firm boundaries and consequences that don't change. Mixing strict and loose boundaries creates confusion and it's part of your job as a mom to "teach right from wrong," Jovanovic points out.

Having a child who saves their least desirable behaviors for you — don't you feel special? — doesn't mean there's something wrong with them or you as a parent, but there may be some ways you can tweak your communication and parenting style. And trust me, both you and your child will be thankful you did. Dr. Raffa says, "A child's [bad] behavior is usually directly related to parenting style and discipline tactics that are not working for the family, however there are some exceptions to this connection in the cases of more serious psychological disorders." If you suspect something more serious might be going on, then you should always seek a professional evaluation and help when needed.

But more than likely, it's not our kids who have the problem. Javonovic says that when she works with families, often parents speak of their child's problem behaviors as if the child is the problem. If your child is well behaved with everyone else except you, it's important to take a good look at your relationship dynamic. She says it's important to ask the question, what are they telling me by behaving badly? "Once you approach solving the problem, [it allows you to] better understand the function of the child’s behavior and what we can do to potentially get a different reaction," Javonovic says.

Dr. Raffa agrees. "Mothers need to first examine themselves and gain insight into their unconscious feelings about parenting. They then need to examine their relationship with their child and ask themselves, 'who's in charge?'" Remember, always seek out some extra help from a qualified professional when needed — it could help your family's dynamic.