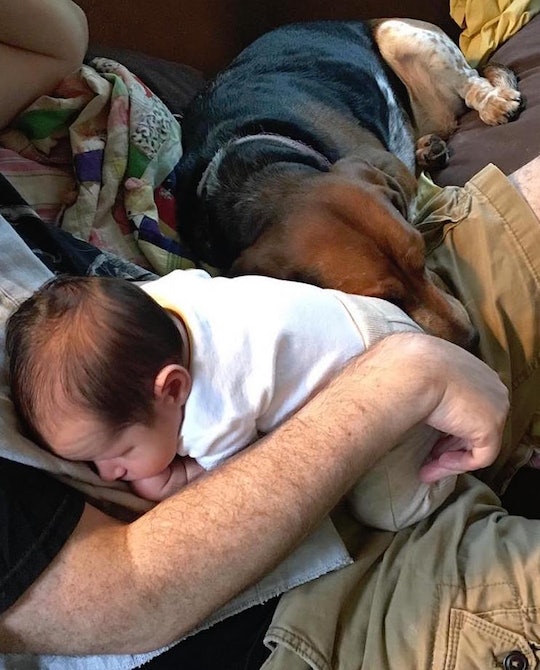 Here's Why Your Dog's Obsessed With Sleeping Next To Your Baby

My household consists of two rescue beagles and two rescue cats, and they definitely rule the roost. They’re pretty spoiled, to say the least, so I was a little concerned about how hurt and jealous they’d be once we brought our son Jack home from the hospital. But the one thing I never dreamed of Googling, but am sort of pleasantly surprised I had to, is why my dog wants to sleep with my baby.

I thought for sure I’d be searching how to keep everyone happy and apart so the dogs and cats didn’t try to casually smother him in his sleep out of pure jealousy. But no. We first brought the baby’s blanket in to let the animals sniff it, and then as soon as we brought Jack through the door, we placed his carseat down for the dogs to sniff. Immediately, our girl beagle, June, laid next to him in his carseat and wouldn’t budge — they’ve been inseparable ever since. Now that my son’s crawling, he squeals with delight when she comes in the room, and he bunny hops over to her so she can lick his face. (Side note: we are always right down there with them and monitoring everyone’s behavior.)

When Jack is fussing or crying, she’s the first one in his room to make sure he’s OK. She’ll also bring him her favorite toy and lay it at our feet or by his crib. Our boy beagle, Hank, isn’t too sure of Jack yet, though he does let Jack touch him and he’s starting to lay next to him when Jack plays on the floor. But June practically wants to be in the crib with the baby when he sleeps. Why?

I spoke with Los Angeles-based certified dog and cat behaviorist and trainer Russell Hartstein, and he says, “They love your baby. Most dogs love to cuddle, commune, and are gregarious social pets that love to be close to and sleep with or next to their families. Just as a baby wants to sleep next to a parent, a dog wants to as well.” But that's not the only reason. On a scientific level, Hartstein says that “dogs are neophiles and love new things and beings. They experience the world predominantly through their olfactory glands, so a new baby in the house smells and is incredibly interesting to a dog.”

As for why our female beagle in particular can’t get enough of Jack, Hartstein says it may be a maternal instinct to protect a family member. “It may be a maternal thing going on, however dogs are individuals and unique. It’s impossible to say without providing a more in-depth full functional assessment and learning much more about your environment, family, dogs, and other pets in your house.”

But as cute as it is, Hartstein does say that it’s probably not a good idea to let your dog sleep with your baby. (Sorry, June.) “I would never recommend allowing a dog to be alone with a baby or child. Children and dogs need to be supervised 24/7,” Hartstein warns. “Babies and children have erratic, unpredictable movement, and high-pitched squeaky voices, which can easily mimic a toy. It is never safe to leave a dog with a baby, and I would not allow them to sleep together either.”

If you're concerned, now would be "an excellent time to train a dog a relaxation and deference protocol and good obedience skills to make sure they are listening and receiving guidance that is clear communication from the parents. If you are all together on the bed or couch relaxing and both are being supervised that is OK, but never alone together," he adds.

Turns out, the reason behind your dog wanting to sleep with your baby is pretty pure — and because they smell so interesting. Just be sure to keep a close eye on your baby and your dogs at all times, and even though they may want to, it's best to keep them apart at bedtime.