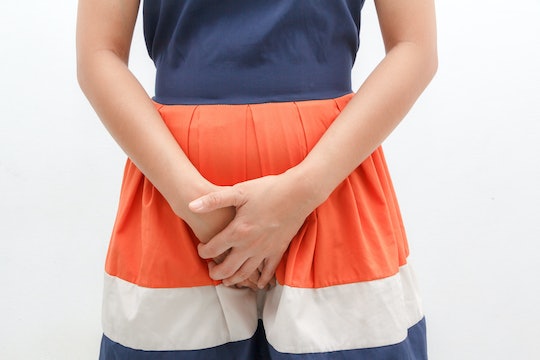 OK let's be honest with each other — woman to woman. Our vaginas have some smells, and they can change depending on the time of the month, menopause, and whether or not we are pregnant. While the causes of some particular scents are more obvious (menstrual bleeding is not exactly going to smell like roses), there are some odors you notice wafting up that seem downright odd. For instance, have you ever wondered, "Why does my vagina smell like sweat?" And I don't mean just after the gym.

But as natural as a sweaty-scented vagina may be, let's face it: No one really wants one. And Health and Nutrition Investigator Sydney Ziverts says there are actions we may be doing or not doing that have an impact on our odors. For example, Ziverts tells Romper her research has found that, "tight clothing or non-cotton fabrics that don't breathe can cause sweat and bacteria to get trapped." Yep, that means all of that sexy lingerie you've invested in could actually be making your vagina stink. Not exactly what you were going for when you splurged on that satin g-string, was it?

Ziverts advises women to wear cotton underwear during the day, reserving the special stuff for the special occasions. She even says that "if it's possible at night, don't wear any underwear at all — just loose pajama bottoms will do."

According to Ziverts, there is a lot about vaginal care that is counterintuitive. "A huge misconception many ladies have is that douching and scented sprays are good for their vaginal health," she says. "In reality, these products can be harmful because they remove the fluids that naturally clean the vagina and disrupt the body's natural pH, causing a different odor to develop."

Dr. Shannon Klingman, an OB-GYN and founder of the natural Lume Deodorant, says, "The odor that occurs from sweating and natural bacteria reactions in the vaginal area can smell the same as a vaginal infection." Unfortunately, Klingman says, this similarity often results in a misdiagnosis for women. Speaking with Romper, she adds, "This is a big reason why a study reported that doctors over-diagnose and treat women for bacterial vaginitis 61 percent of the time and over-diagnose yeast infections 77 percent of the time."

For this reason, it's important for women to be aware of the normal scents of their vaginal regions. By noticing the change in odors throughout your cycle, you may be better prepared to catch a possible infection and educated enough to not assume one is present when it is not. To this end, Ziverts' advice makes perfect sense: Douching or spraying to cover up odors might actually throw things out of whack down below and make detection of abnormalities impossible.

Cleaning your vaginal region as naturally as possible, wearing cotton panties most of the time, and changing them as often as necessary will likely go a long way in ridding your crotch of those pesky odors. But if you do catch a whiff of something a little unseemly, give your girl a break — she's got a lot going on down there.

More Like This
How Hot Is Too Hot For Babies? Experts Weigh In
Banana Boat Sunscreen Has Recalled Products That Were Found To Contain Benzene
How To Avoid & Treat Lyme Disease
Why Does My Baby Cough While Breastfeeding? Experts Explain