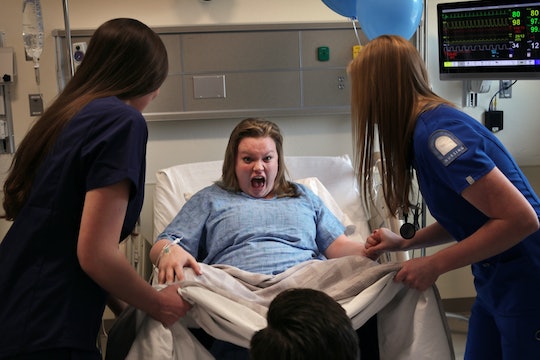 The Lack Of Privacy During Pregnancy Is Honestly *Super* Violating

After struggling to conceive for years, I felt like I didn't have any right to complain about pregnancy. Like all grateful women who've gone down that long TTC road, I thought to myself, "I should be so lucky to have nausea, weight gain, stretch marks, and sore breasts!" I knew my body wasn't entirely mine anymore. Gone were the sangrias and venti servings of coffee. But what no one prepared me for was the loss of privacy once you become pregnant. I had no idea how many people would be up in my business and how many people would see me naked throughout my pregnancy. As a private person, admitting a small gallery of strangers to sit court-side at my body felt like a real invasion.

Once it was confirmed that I was pregnant, everyone — family, friends, and even strangers — began to ask me questions, most of which were quite personal: "What are you eating? Are you going to breastfeed Are you gaining the right amount of weight? Are you sure that's safe during pregnancy?" It felt like I was on pregnancy Shark Tank, having my choices torn to shreds by professional critics. I expected lots of questions from medical professionals, but not from strangers or ~deeply curious~ neighbors.

The more obvious my pregnancy was, the more questions I was asked. My mother-in-law made it her mission to ask complex questions about what I was eating and how much weight I was gaining. Was she plotting this information on a secret Gantt chart? I honestly don't know. I was on a special diet that was approved by my doctor because I had gestational diabetes, so I was very on top of my health, and yet I was constantly asked why I wasn't eating more or gaining weight quicker. Everyone is curious and judgmental about what a pregnant woman is doing "right" or "wrong." This constant level of inquiry was invasive, but that's not where the privacy issues ended, unfortunately.

I expected routine exams throughout my pregnancy, but I had no idea how many strangers would see my vagina before I even gave birth, and I was not prepared for how awkward and vulnerable it would make me feel. Early on in my pregnancy, I was excited about getting ultrasounds. I wanted to experience hearing my baby's heartbeat and getting sonogram photos to stick on my fridge. But the first few ultrasounds were transvaginal, conducted with a large wand through the, yes, vagina. That meant another couple of people — ultrasound technicians — joined the crew of those who had been privvy to my insides. I had no idea how many technicians worked in that tiny office I visited, but nearly 9-10 different techs saw me naked.

I expected an abdominal ultrasound, not this. During those transvaginal ultrasounds, I felt exposed. I kept telling myself that this was only temporary or that things would get easier, but I was wrong. When I was around five months pregnant, I was diagnosed with gestational diabetes. This meant extra scans and testing, which also meant more strangers seeing me naked. And though by this time I experienced more abdominal scans, my daughter was breech and sometimes the techs had trouble seeing her from the angles that they needed, so I had more transvaginal scans than the average woman, which I wouldn't have minded so much if I saw the same tech each time. On top of the additional testing and scans, I also had to send a nutritionalist and nurse a weekly report of what I was eating, along with my blood sugar readings which I had to check four times a day. I had no privacy during my pregnancy.

And then came the day I had my daughter. As luck would have it, I was scheduled for a c-section because my daughter was breech, but went into labor early. When I arrived at the hospital, three nurses and a doctor checked my vitals and, yep, they all saw my vagina when they checked if I was dialated.

As I was prepped for my c-section, I was lead to another room with four more doctors and nurses, all of whom saw me naked as well. Even after birth, I was in the hospital for three days and I'd say a dozen people saw me naked, maybe even more. Nurses and volunteers walked in while I was trying to breastfeed and my breasts were obviously exposed most of my stay. Other nurses came to check my postpartum bleeding. One nurse actually had to watch me use the bathroom to make sure everything was okay with my bladder.

On the low side, let's say that in the course of my pregnancy, 10 ultrasound techs, six nurses, and three doctors each journeyed to the Ivory Castle to see me naked. That's 19 people, or enough people to field a baseball game. That's a lot of Crackerjacks!

It's true that you'd do almost anything during pregnancy to get a baby out of it, but no one warns you just how invasive medical attention can be. As a private person, I found it incredibly intrusive. At least, I like to joke, buy me a sangria before getting out the wand next time.