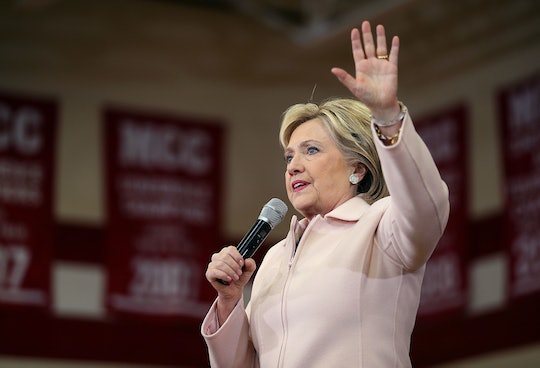 Why Does Super Tuesday Matter? It's A Big Day For The 2016 Election

Next Tuesday is not just any Tuesday. It's Super Tuesday. Even if you've been following the election, it may not be clear exactly why this day is so important. So, what's the big deal. Why does Super Tuesday matter? In short, it's the day that separates the wheat from the chaff, the probables from the possibles, the people who could win this thing from the people who should go back to their day jobs. It's an especially big day for the GOP because, as you may have noticed, Donald Trump has won three out of four states so far in the primaries. This could mark the beginning or the end of his bid. Already Jeb Bush has dropped out of the race, and, after March 1, more are sure to follow. Super Tuesday is the biggest single opportunity for presidential hopefuls to receive delegates and it all happens in the span of 24 hours. Exciting times.

Come March 1, 12 states and one U.S. territory will line up to make their candidate choices. The results, come what may, will most likely reveal who will be both parties' nominees. If you're wondering if you should be out there voting, the states who will have primaries on Super Tuesday are: Alabama, Alaska, American Samoa, Arkansas, Colorado, Georgia, Massachusetts, Minnesota, Oklahoma, Tennessee, Texas, Vermont, and Virginia. That's a lot of delegates.

If you're not quite convinced yet that Super Tuesday matters, let's look at the numbers. The day's voting makes up a whopping 24 percent of the Republican total delegate number needed to land the nomination, according to CBS News. It's 21 percent for Democrats. At the moment, Clinton and Trump are leading in the polls, but that doesn't mean it's a done deal. The remaining candidates are pulling out all the stops for one final shot at victory. Despite recent primary losses, Texas Sen. Tex Cruz still said he can win the Republican candidacy. Cruz told CNN:

It will matter a great deal where the delegate count is at the end of the day Super Tuesday ... the terrain is very favorable. And we're going to campaign hard.

If he does manage to pull ahead, he may have a shot. But right now, it's a long shot. Super Tuesday is incredibly crucial for both parties and for the eventual election outcome. If you're in one of those participating states, don't let it pass you by. Go vote. At this point, every one counts.